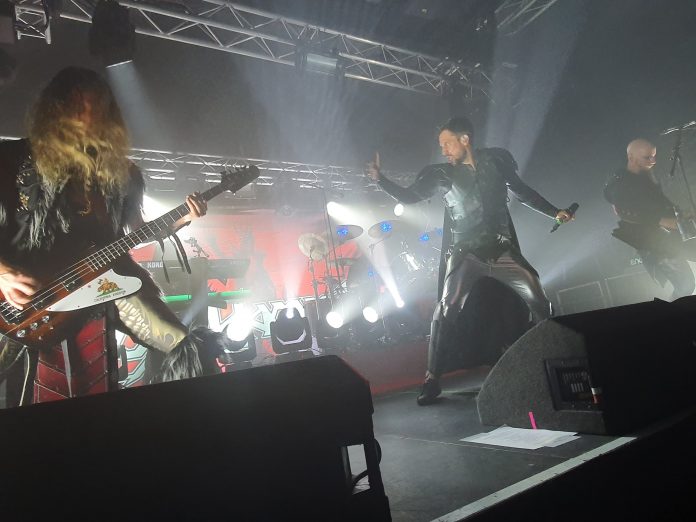 The saying, if less is more, never made much sense to me. It was Fraiser on TV that rather nailed it. He said: “yes, but if less is more, then just think how much more, more could be.” Which is a theory perhaps adopted by Wind Rose. The Italians have clearly decided that if you’re gonna play power metal then you might as well do it dressed as though you are in Game Of Thrones. Frontman Francesco Cavalieri is huge and these Tolkien inspired sounds keep a packed crowd more than entertained. “Of Iron And Gold” sounds exactly like you think it would, “Diggy Diggy Hole” way better than its title and wherever “To Erebor” is going it sounds epic. Excess, in every way. 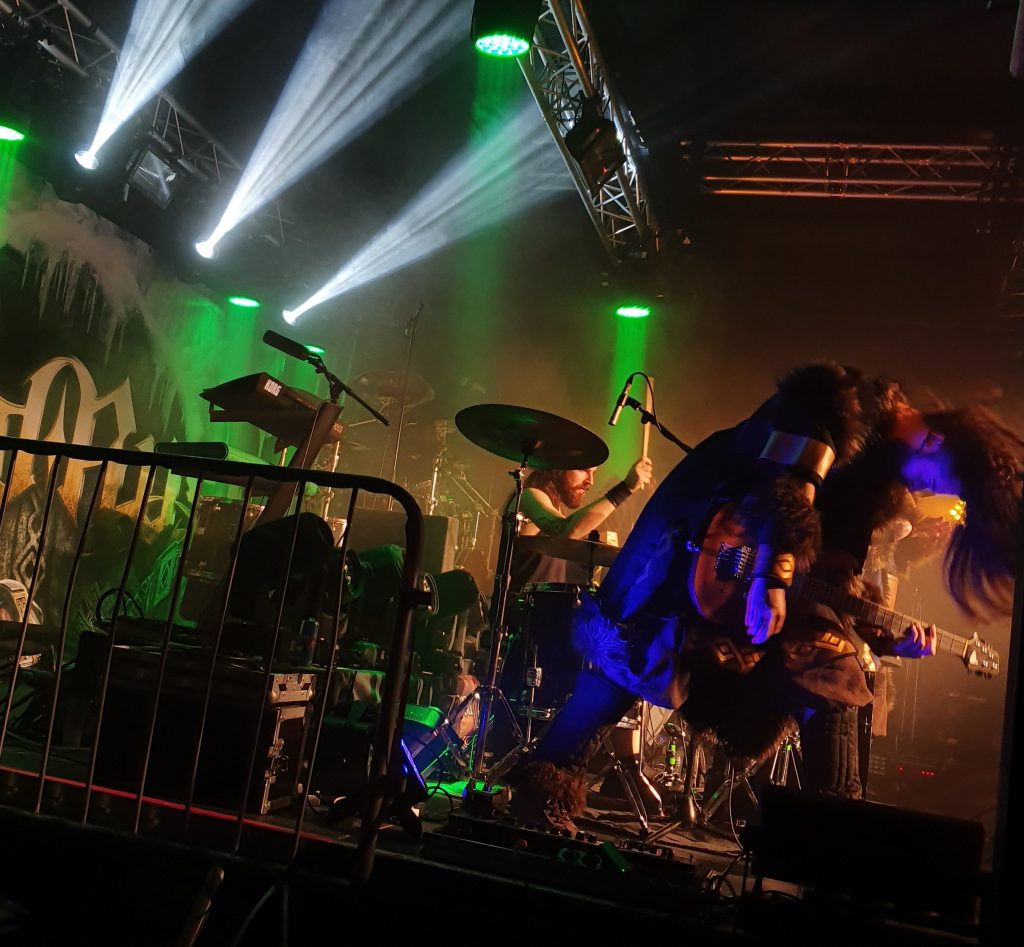 When I wrote the review for Beast In Black’s “From Hell With Love” record in the winter i wrote this: “They were a band formed when original Battle Beast member Anton Kabanen walked out and formed his own band – presumably, on this evidence at least, because he thought Battle Beast were a little stripped down”. Watching them here, they are so gloriously OTT that you cannot help be swept along in the leather-clad maelstrom. Their 45 minutes is a masterclass in bombast. Pure metal, sort of, if metal had an electric beat. “Cry Out For A Hero” from that record starts and singer Yannis Papadopoulos bounds out after the rest, as if it’s an arena gig, which, it might as well be. A set split between their two albums, “Unlimited Sin” an early foray to the past, but which all sounds enormous. After their eponymous song the crowd chants their name, by the end of the title track of their recent one, the sold out Mill is ready to follow them to the gates of hell, or at the very least the “End Of The World”. They play that one last, and they bow. Like rock stars. Like arena stars. As easy as it would be to snipe at this, look at the people watching. There’s a joy you cannot fake. That’s what Beast In Black provide and you can only love them for it. 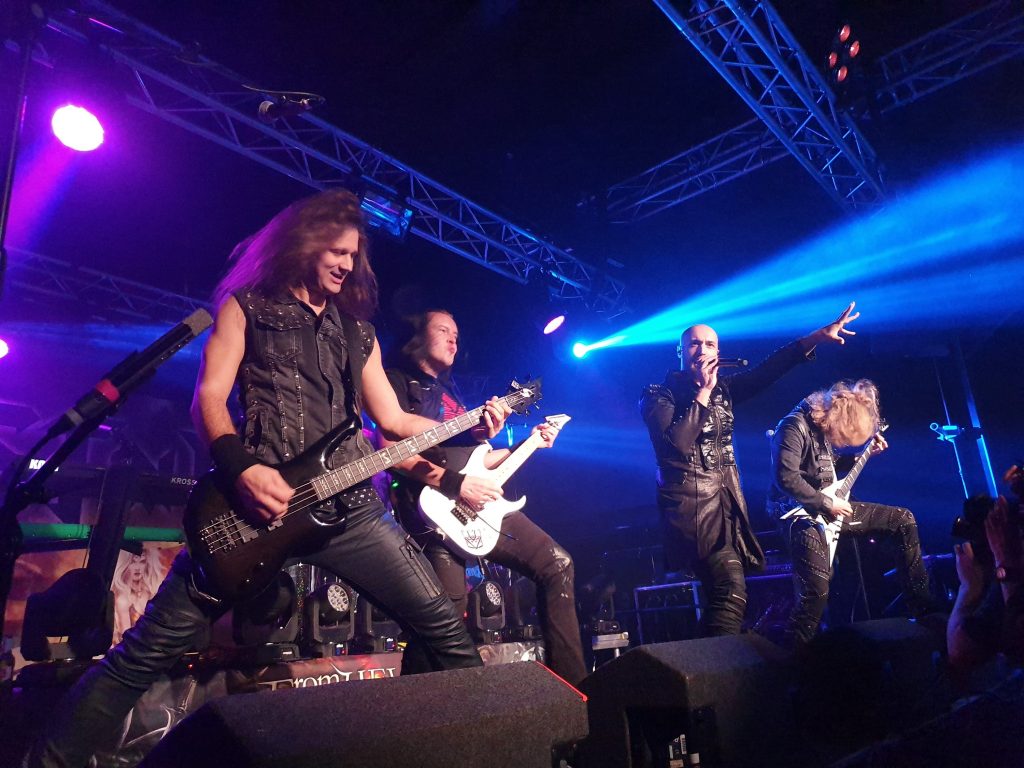 Tonight’s gig starts with a cardboard cut out of Tom Jones singing “Delilah”, it ends with a Goblin crowning the bassist as the Hoots King (or something), Angus McFife killing Zargothrax with a (glory)hammer before “Rockin’ All Over The World” plays.

And if you think that’s tough to get your head around, then the bits in between were truly mental.

Actually, in fairness, if you are like me and you are more into music than concepts, then Gloryhammer have you covered. Because for all the ludicrousness – and that’s the thing to call it too – for the almost 90 minutes they are on the stage in front of a crowd that if its not sold out must be close, deliver some of the finest, purest, most pompous, grandiose power metal around.

And trust me too, “pompous” and “grandiose” are meant as compliments here. And I reckon would be taken as such.

“The Siege of Dunkeld (In Hoots We Trust)” is almost a prologue here, “Gloryhammer” is a singalong  and that’s them getting started.

It is interesting that the audience, as I look around, is almost totally, uniformly “into” it, “in” if you like, on the plot. So “Angus McFife” is roared, and “Legend of the Astral Hammer” likewise. They all are.

Some of them are superb, too. “Hollywood Hootsman” almost has you forming a power metal band and going on quests yourself, and if it seems almost redundant to say these are “fists in the air” then “Hootsforce” really is.

“Masters of the Galaxy” exemplifies some battle in space or other – I lose track – it does, though herald an encore, and as Thomas Winkler (who struts about as Angus all night) puts it “some bands want to set the world on fire….we think the Universe should burn” and “Universe On Fire” proves it.

They have too, “The Unicorn Invasion Of Dundee” to be precise, and it goes down like a storm.

And, as I say, that’s the point. There’s no point in going to work tomorrow and trying to explain this to your mates, but if you know, you know. And Gloryhammer, basically, know that too.

From the warped genius of Christopher Bowes – who when he’s not on keyboards here is piloting Alestorm over the seven seas – Gloryhammer are power metal turned up to 11, and that is either scary or scarily brilliant, depending which side of the fence you’re on.