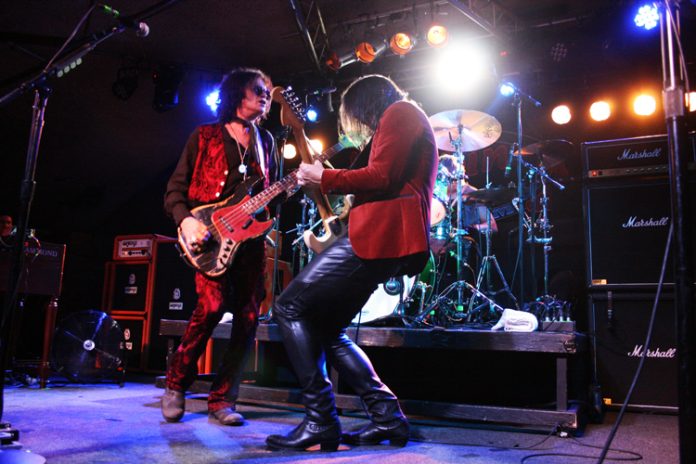 You can take the boy out of the Black Country

From just up the road in Walsall, but with eyes on the world, come Stone Broken. The band – for whom this is merely the third date of a full European tour with Glenn Hughes – stand on the edge of the a real breakthrough. There are no gimmicks about  them either. Merely great songs, and if ever a band exemplified the maxim of “be so good they can’t ignore you” it is SB. Affable and humble enough to thank those in the crowd who have helped them over the years, the fact they soon will be the property of thousands of strangers is lost on no one. “Better” is greeted like an old friend, “This Life” you suspect is very much a mission statement here, and in between they air a new one, from a record that might be out this year. “Just A Memory” slams like prime Nickelback and suggests that album number two might be just as much of a triumph as the debut “All In Time” was. By the time “Not Your Enemy” has ended things here, even those who didn’t know them before are surely aware of Stone Broken now. Whatever “it” is, Stone Broken have. In spades. The latest in the long line of Black Country bands to make it big are right here. 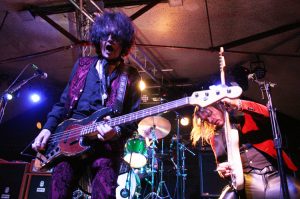 “When they asked me about the lighting tonight,” says (almost) son of this parish,  Glenn Hughes, in that curious brogue of his that is part American and Wolverhampton, “They asked me how I wanted to be seen. I said: ‘I want to see them, I don’t mind how they see me.”

With most bands this would be hogwash of the highest order. Glenn Hughes doesn’t do BS, though. For an hour and a half tonight he means every last word.

There is no doubt that from the minute he strides onstage dressed in an incredible purple suit and looking every inch the rock star to play the psychedelic “Flow” from his stunning “Resonate” record, which emerged last year, that this is a special night for the  crowd, but also for Hughes.

A wonderful musician and songwriter, his bass playing on “Getting Tighter” – from his Deep Purple days – is little short of stunning, but oddly this isn’t necessarily about music. Tonight runs far deeper than that. It is incredibly rare to find a bond like this between artist and fans. Nothing sums it up better than when Hughes shares the news that his mother is terminally ill and there is a genuine and palpable amount of feeling for him in this time. Then a second later he is straight into a soaring and emotional “Medusa”. No wonder he says music saved his life.

He has surrounded himself with a brilliant band here. Soren Andersen – both his co-producer and guitarist is superb, but its the Hammond Organ of Jay Doe that really hits top gear, giving the Purple songs “You Keep On Moving” and “Might Just Take Your Life” a real timeless, Jon Lord-esque nostalgia. In amongst all this there are a smattering of Black Country Communion songs (apt perhaps, as they’ve just got back together) and just in case anyone had forgotten, “One Last Soul” and “Black Country” – come on, what else was he going to finish with? – remain two of the best hard rock songs of recent years.

But he’s back for an encore of the lead track on “Resonate”, “Heavy” before something very special. Inglorious singer Nathan James appears to duet on “Burn” and prove yet again that he is the natural heir to David Coverdale’s throne.

You’ll notice he didnt say “sing like me.” No one can. That’s why he’s been doing this for fifty years. He’s Glenn Hughes and tonight he was home.

Previous article
Lions Grow All Over The World
Next article
Featured Band: Foscor