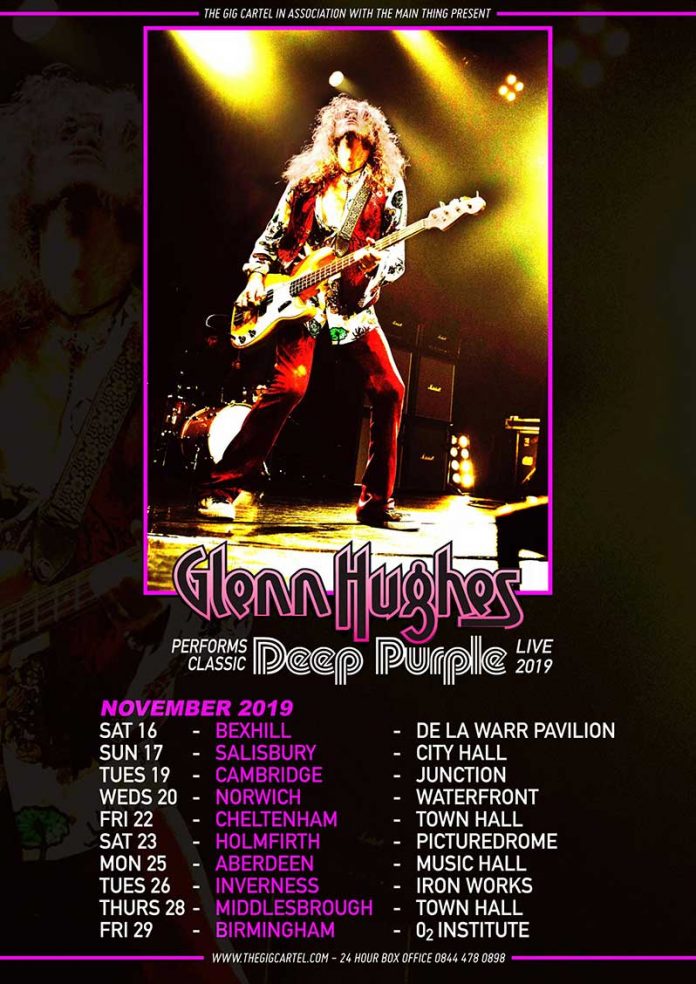 Last week Glenn Hughes needed to re-schedule dates of his “GLENN HUGHES PERFORMS CLASSIC DEEP PURPLE LIVE” May 2019 UK Tour due to health issues. The former bassist and singer of Deep Purple, known to millions as the ‘Voice of Rock’, Rock and Roll Hall of Fame inductee, and the current front man for rock super group Black Country Communion, is pleased to also announce a new set of dates in November alongside the re-scheduled ones.

The re-scheduled dates include Salisbury, Norwich, Holmfirth and Birmingham with additional dates in Bexhill, Cambridge, Cheltenham, Aberdeen, Inverness and Middlesbrough.

Deep Purple took a quantum leap when the then 20-year-old Glenn Hughes was seconded from British funk-rock outfit Trapeze in mid-1973. As bassist and co-vocalist (with David Coverdale), he helped steer the legendary rock group in the progressive direction of Burn (1974), Stormbringer (1974) and Come Taste the Band (1975), while touring the world for three years.

His solo debut album Play Me Out (1977) preceded later albums with Black Sabbath and Gary Moore. The last 25 years have seen a rush of solo work and collaborations for the ‘Voice of Rock’ including mega hit America: What Time Is Love? with the KLF in 1992, and four critically acclaimed top selling studio albums released between 2010 and 2018 with rock super group Black Country Communion featuring Joe Bonamassa, Jason Bonham and Derek Sherinian. Glenn was also inducted into the Rock and Roll Hall of Fame in 20l6 along with other members of Deep Purple.

Taking a page and inspiration from the Blackmore/Coverdale/Hughes/Lord/Paice Deep Purple MK 3 California Jam and Made in Europe era, the upcoming live show features the Purple classics Burn, Stormbringer, Might Just Take Your Lifeand Mistreated, amongst others, plus tracks previously never performed live by the original MK 3 line-up.

Classic material from the Tommy Bolin MK 4 period is also featured, including Getting’ Tighter – Hughes’ funk rock extravaganza extraordinaire, plus the brooding Coverdale /Hughes masterpiece You Keep On Moving.

Deep Purple MK 2 hits Highway Star and Smoke on the Water are also featured, because, as Glenn points out, ‘’I did play both these numbers during my time with Purple and they were mainstays of the live set when I was in the band. As my manager pointed out to me, the first time Smoke on The Water was ever played live at Madison Square Garden was when David and I were in the band in 1974. I love singing Highway Star, too.”

Continues Glenn, “A few years back, I cut a barnstorming version of Highway Star for the Machine Head anniversary tribute album with my good friends Steve Vai and Chad Smith. I’m not playing anything on the forthcoming tour that I didn’t either play live or record in the studio with Purple.”

Before the GLENN HUGHES PERFORMS CLASSIC DEEP PURPLE LIVE World Tour, the last time Glenn has performed a show solely of Deep Purple material was his last show with Purple at the Liverpool Empire on March 15th, 1976. Not one wallow in nostalgia, hence his extensive and varied career post-Purple, Glenn feels the time is right to acknowledge and pay homage to his past, his musical legacy, and, most importantly, to one of rock and roll’s most acclaimed, influential and successful rock bands.

Previous article
DON’T CRY FOR ME, RYAN
Next article
FOLLOW THE LEADER