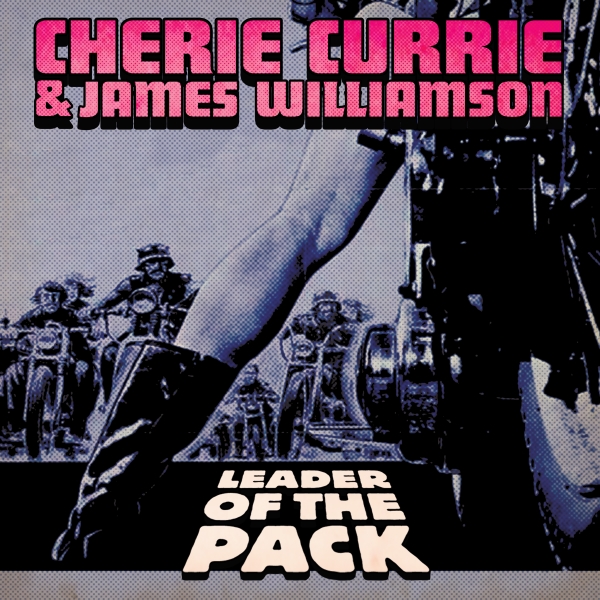 RUNAWAYS Vocalist CHERIE CURRIE and STOOGES Guitarist JAMES WILLIAMSON Team Up For A New Version Of The Shangri-Las’ Teen Heartbreak Classic “Leader Of The Pack!”

Los Angeles, CA – With the roar of a motorcycle, ’60 pop chanteuses The Shangri-Las introduced the world to a new tragic hero, the unforgettable bad boy heartthrob and the titular “Leader Of The Pack.” The year was 1964 and by that time “teenage tragedy songs” had become a genre unto itself with the likes of Jan & Dean’s “Dead Man’s Curve,” Ray Peterson’s “Tell Laura I Love Her” and many others. But none captured the melodrama of heartbreak as well as “Leader Of The Pack,” which would become a #1 pop hit and the defining song for The Shangri-Las. Now, two veterans of garage rock, trailblazing heartthrobs in their own right, have teamed up for a glorious new version of the tune. Famed Stooges guitarist James Williamson pours gasoline on the song’s instrumental track and lights it on fire with his raw, heavy guitar playing, while Runaways vocalist Cherie Currie, aided with backup vocals by Leslie Koch Foumberg, amps up the theatricality for maximum emotional impact.

Williamson sings the praises of this new version saying “When I first discussed playing on a remake of ‘Leader of the Pack’ I was skeptical that we could improve on it. That song is so ingrained in my psyche that I couldn’t imagine anyone other than Mary Weiss singing the vocal. But, when I heard Cherie Currie’s version combined with my guitar, I instantly knew we had done an update we could be proud of. I just love the way it came out.”

This supercharged version of “Leader Of The Pack” is currently available on all streaming and download platforms as well as on a special 7″ vinyl single backed with a tune that will be imminently familiar to fans of Cherie Currie, “Cherry Bomb” – a previously released recording featuring music by The MC5’s Wayne Kramer and The Ramone’s Marky Ramone.