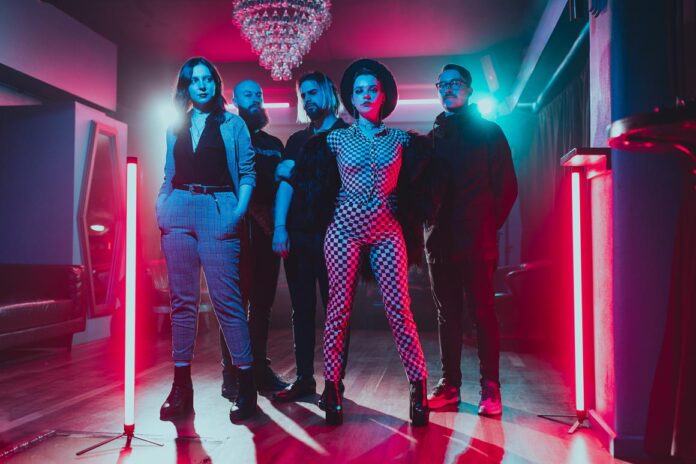 “The song resonates with many different experiences that we’ve all faced recently. From doing a whole lot of nothing, to then diving back into a fast-paced, relentless rhythm, with no certainty of anything going ahead. It’s all so overwhelming to even begin to think about. It feels like you’re being submerged, drowning in an ocean, and you can’t get out, even though you know that all you have to do is sit up, breathe, and just feel the waves.”

Opening with thunderous drums, ‘Waves’ aptly crashes into a wall of searing guitars and thudding bass, paving the way for front-woman, Amariah Cook, to showcase her sweeping and eclectic depth. As the track unfolds, structure and dynamics are harnessed with finesse. Whilst navigated by the deft instrumentation of the band, the enigmatic vocalist effortlessly switches between her immense screaming range and hypnotic clean melodies.

Amariah‘s debut performances turned heads, headlined by her charismatic personality, endless energy, spontaneous stagecraft, and incredible proficiency in both in harsh and clean vocals, which have a timeless quality to them.

To coincide with the release, the band will perform a number of headline shows and festivals throughout Australia in the next coming months, alongside Bad/Love, Banks Arcade, Parkway Drive, Polaris, Trophy Eyes, Thy Art is Murder, Wolfmother, Kingswood, Twelve Foot Ninja, Caligula’s Horse, Circles, Dregg, and many others.

‘Waves’ will be followed up by a series of singles to be released in 2022, which will lead into the group’s debut album due in the second half of the year.
Follow Future Static:
Facebook | Instagram | TikTok | Twitter | Spotify