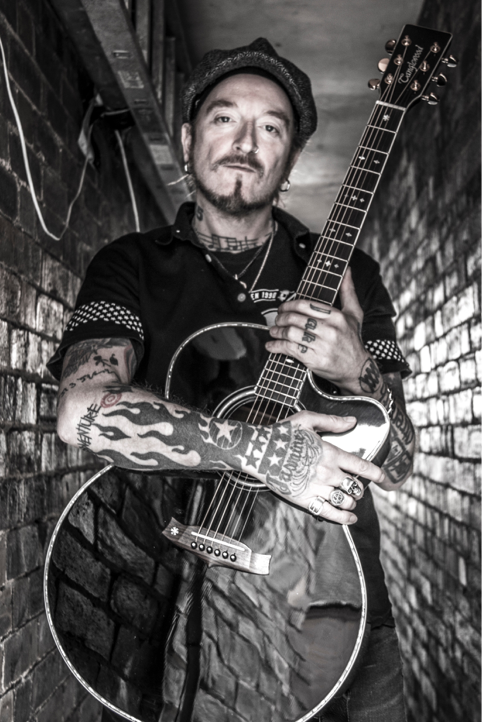 Special release for RSD
For Record Store Day Ginger Wildheart releases The Ones That Got Away, a limited edition, 12” slade boot silver sawblade shaped disc on Round Records Records.
The Ones That Got Away 4 track 12”  is limited 1000 copies only
The Ones That Got Away:
Ginger – “G*A*S*S was an exclusive fan-club that I set up as a year long project that promised three brand new songs a month. An album, Year Of The Fan Club, was released with my own favourites cherry picked from the years worth of songs.
Out of 36 songs, however, there were always going to be fan favourites that stylistically didn’t fit on the album, but were undoubtedly popular enough to release on their own merit. So here it is, the songs voted by the fans, together on this highly collectible piece of limited edition vinyl. When I was a kid fan clubs fascinated me, and limited edition vinyl was like porn.
Please, then, enjoy a bit of both on this soon-to-be-available-on-eBay-only-and-sold-for-a-fucking-fortune item while you can.
In fact buy two, and sell the other when the market price goes up. Once this one’s gone it’s gone.”
FRIENDS OF BILL:
Written and recorded in Los Angeles, a place where the spirit of Rock n Roll has lessened in proportion to the rise of sobriety. It’s like a fucking epidemic out there, sober people playing music with sober people while bemoaning the lack of action on the strip compared to yesteryear…when everyone was three sheets to the wind, presumably. Drinkers are usually politely shunned from association with the AA brigade, the hypocrisy of which, I’m sure, is not lost on the sober mafia of famous rock stars who simply made too much money, had too many choices and picked all the wrong ones.  Anyway, I’m happy to say that not everyone in LA are sobriety addicts, including the four musicians who played on this song. And the engineer. And all the friends that hung out at the studio and partied ’til dawn.
BLOODY KNEES:
The very first song recorded for the G*A*S*S sessions. And as I drove to Atherstone, towards Majestic Splendour, Jase Edwards studio, I’d be lying if I said I wasn’t unusually nervous. There would be many songs recorded over this insanely busy year, but only one song was going to kick it all off, and this song would either set a high bench mark or put us all in a perilous state of doubt. Plus I was playing all the instruments in this session (although Jon Poole would later offer some incredible musical input), so the stakes were high.
Of course Jase and I have worked together on many albums, and the session went like a dream, with the amazing Givvi Flynn entertaining us all with an army of voices. While a great song it itself, I will always be most fond of this one as the on that started the whole thing rolling.
THAT’S A NASTY HABIT YOU’VE GOT THERE:
Another song recorded in the Jase Edwards session that just fell into place. Even experiencing recurring vocal issues (long term throat problems that have no seeming cause according to medical science), appeared to add to the vibe of the song. Crooning was out of the question so I asked Jase if I could just shout it in a Geordie accent, to which he replied in the positive and I set about squawking in my native tongue over a few bottles of broon. I love the final song, that spiteful vocal performance matching the subject matter perfectly.
These things aren’t only sent to try us but to change things and, possibly, make them better.
PETIT MORT:
This one came to me in the middle of the night after my father’s funeral. I rushed into the quiet kitchen to record it onto my dictaphone, turning suddenly to see a shadow standing directly in front of me. Once the electric shock of fright had activated every standing hair and bumping goose on my body, I realised it was my own reflection in my mums glass door. I had planned to sing this one myself, obviously, being as the lyrics were so personal. But then the mighty Yolanda Quartey came to the studio and asked to have a bash at it. She nailed the emotion of the lyrics in such a way that I felt the same hair raising goose bumps that I’d felt back in that quiet kitchen. At which point the song became hers. I was never going to come anywhere close to capturing the raw emotion that Yolanda so naturally poured out. While a very easy person to love anyway, I developed even more of it for Yolanda after she made this song her own.
The Ones That Got Away track listing:
Side 1:
Friends Of Bill:
Bloody Knees
Side 2
That’s A Nasty Habit You’ve Got There;
Petit Mort