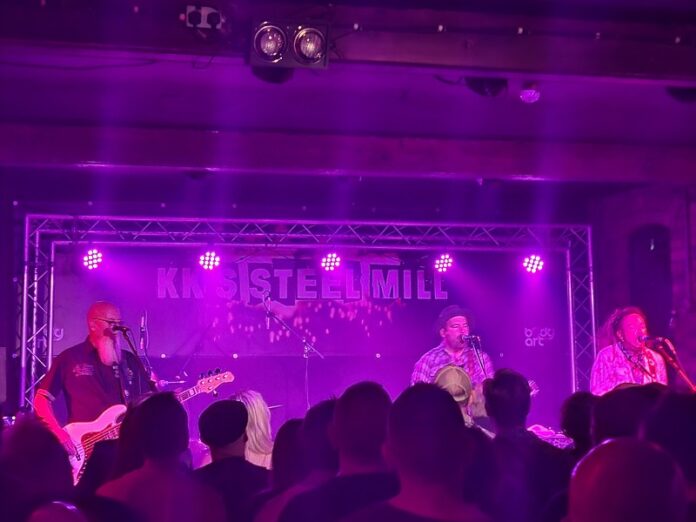 “This one,” says Carol Hodge before she plays “Along For The Ride”, “is about accepting circumstances”. It’s a good job she’s got a sense of humour. As good as she is and as much as she smiles her way through proceedings, the inescapable fact is that there’s a good section of the crowd that does not stop talking while she’s on stage. Hodge, though, is used to dealing with the unruly (she was a former drama teacher) and merely gets on with it. Her two recent albums “Savage Purge” and “The Crippling Space Between” were both favourites of MV. Band affairs, she reckons they sound like Queen – I can confirm they’re much better than that – and even hubbub and chatter cannot mask that the likes of “Best Thing In This Town” are achingly beautiful. Her cover of Leo Sayer’s “The Show Must Go On” is as well-done as it is fun (and along the way we also find out that Chas Hodges is not her dad, although given that they spell and pronounce their names differently…..). As the harmony of “Twenty Miles Up” ends her set here, it merely strikes you as a real shame that those who couldn’t keep their mouths shut missed out on something so lovely.

Tonight begins and ends with the track “The Road” (there’s a little reprise of it at the end of “Jessica”” by The Allman Brothers) and the first line keeps coming back to you again and again. I’m paraphrasing here because the song isn’t out yet: “It’s been a while, but damn it’s good to see ya”.

That’s basically the vibe throughout the show, because, frankly (and this is no disrespect to any other band he’s been in) Ginger Wildheart hasn’t looked this happy in a long time.

Not least of the reasons why is the music this band is making. My notes say simply “The Allman Brothers meets Dan Baird” and that’s before he’s played a cover of the former and also chucked in a Georgia Satellites tune (the phenomenal “Six Years Gone”).

It’s an odd one because The Sinners have one song out currently. They have – as they repeatedly tell us – have two albums ready to go. Whatever, their songs are superb. “That Smile” has that kind of easy Ginger melody, the sort of thing that might have been on his solo stuff, but the rest isn’t really like that at all.

Their cover of “Dirty Water” by Quo is fun, but work like “Walk Of Shame” (which on first listen is the most immediate of these) and “Key Of Love” (the one the Sinners say they like the best) and “Lately Always” are enough to get people excited about this band.

And band, it must be said, is the operative word here. The eponymous Mr. Wildheart is not front and centre, he’s stage right as we look, and Neil Ivison does a much of the singing. Joining them are Nick on bass and Shane on drums. Most of them met each other in the studio, but there’s already an easy chemistry.

The single, “Wasted Times” is excellent, but “Footprints In The Sand” – the first one they ever wrote – chugs around like prime Tom Petty, and this is a varied thing too, as “Not The Staying Kind” has a different side to them again. Best of all, perhaps, is one of Ivison’s songs “Arms Of Love”. “I fell in love with this,” laughs Ginger, “and decided this is the band that was going to make me rich”. You can see why he loves it, that’s for sure.

“I Got You” finishes the set, but there’s an encore (there isn’t usually when Ginger plays) and its such fun. “The Weight” reminds everyone of the genius of The Band and “Jessica” shows the skill of them as they jam to bring it to a close, but only after Ivison has drank hi first Jagerbomb in 20 odd years. It’s that kid of relaxed evening, as what amounts to the two frontmen bounce off each other.

There’s a couple of Ginger songs here in the course of the evening. “The Words Are Gonna Have To Wait” and “The Pessimists Companion” prove a couple of things, namely that he’s wanted to do this stuff all his career and that in The Sinners he now has a group with the skill to pull it off.

On one occasion he thanks the crowd for coming and adds: “This is how people used to discover bands, you know? They’d come out and listen to stuff they didn’t know. These days there’s all the YouTube and Spotify stuff. Isn’t it great to see great songs played by a brilliant band?”

Yes. Yes it is. The Sinners are at the start of their journey, but my it looks like being an exciting one – not to mention an enjoyable one for the people in the band.