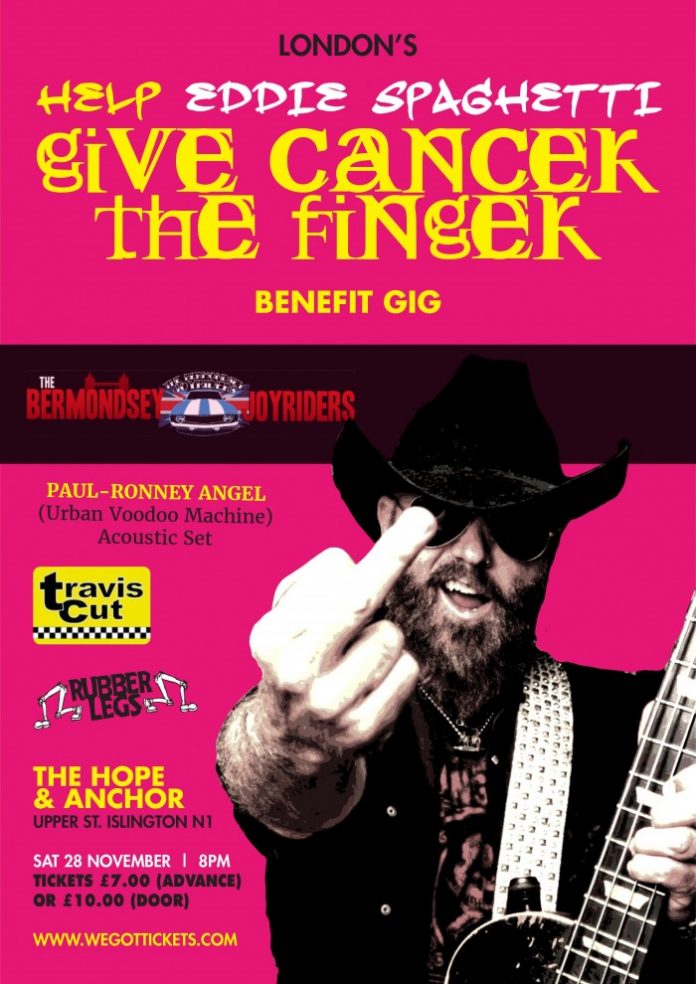 Help give Cancer the finger in aid of Supersuckers frontman

As you probably already know, Eddie Spaghetti of the Supersuckers was recently diagnosed with throat cancer. After a major operation and six months of intense radiotherapy, he has now been given the all clear, which is great news. However, he now has massive medical bills so his friends, family and bandmates have set-up the Eddie Spaghetti Cancer Fight Fund.

To help out, and send our support from the UK, a group of rockers have  set up a Benefit Gig at the Hope & Anchor in Islington, on November 28th, featuring the Bermondsey Joyriders, Paul-Ronney Angel (of the Urban Voodoo Machine), Travis Cut and Rubber Legs.

Tickets are available from WeGotTickets
http://www.wegottickets.com/event/337057 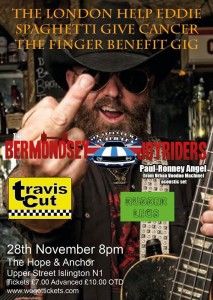 Here is a statement from the band from a few months ago: “Τhe Supersuckers have had to cancel all previously planned tours as lead singer, bass player and band leader Eddie Spaghetti, has been diagnosed with stage 3 oropharynx cancer and will undergo surgery and radiation treatments this summer. On June 18th, Eddie played his last show with the band for awhile, making it bittersweet as he will be one step closer to getting this shit over with but he will have to put on hold the very thing he has always done; put his guitar strap across his shoulder, walk up to the mic and play his heart out. There will be no income after the last show before Eddie’s surgery while The Supersuckers have had to cancel their summer European tour and plans to release the next Supersuckers album are in jeopardy.
Fans and friends are encouraged to help offset the expenses of Eddie’s treatment and having to be off the road by supporting the Eddie Spaghetti Cancer Fight Fund ; http://supersuckers.com/eddie/