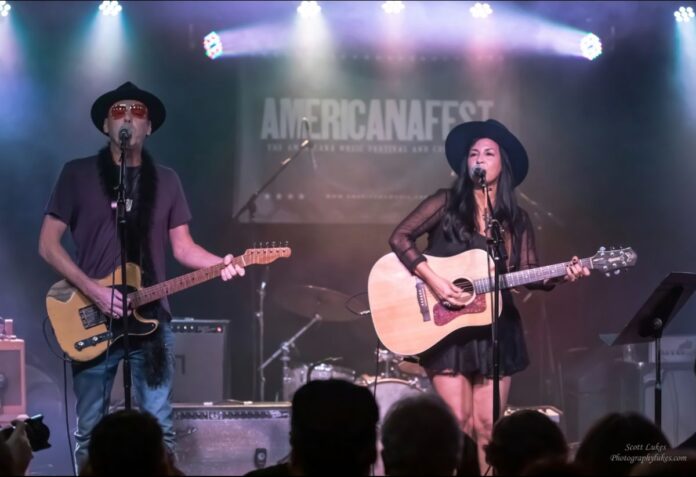 An Americana band whose sun-kissed songwriting, versatile guitar work, and lush vocal harmonies evoke the California coastline as much as the Bible Belt countryside, the HawtThorns are rooted in the collaborative chemistry of husband-and-wife duo KP and Johnny Hawthorn.

Tarot Cards and Shooting Stars marks the band’s second collection of hook-driven country-rock and amplified Americana. Recorded in both L.A. and Nashville, it nods to both sides of the group’s geographic and musical roots. The Nashville sessions took place in KP and Johnny’s home studio, sandwiched between walks around the couple’s new neighborhood, with cicadas chirping outside the studio doors. The southern culture and Tennessee humidity seeped its way into the music itself, adding gospel-soul grit to “Let’s Get Together”, the albums first Single. A lush, layered album with diverse arrangements, Tarot Cards and Shooting Stars finds the group embracing its new home without forgetting its roots.

“There’s been so much darkness lately,” says KP, who found herself unable to tour behind Morning Sun due to the global pandemic. “I understand why artists feel compelled to write about that, but I wanted our record to feel like a light at the end of the tunnel. It’s a happy-ending story to a tough year.”

KP and Johnny are musical lifers, having weathered more than a decade’s worth of the music industry’s ups and downs. They’ve tapped into a new beginning with the HawtThorns, a band whose music blurs the boundaries between genre and geography.