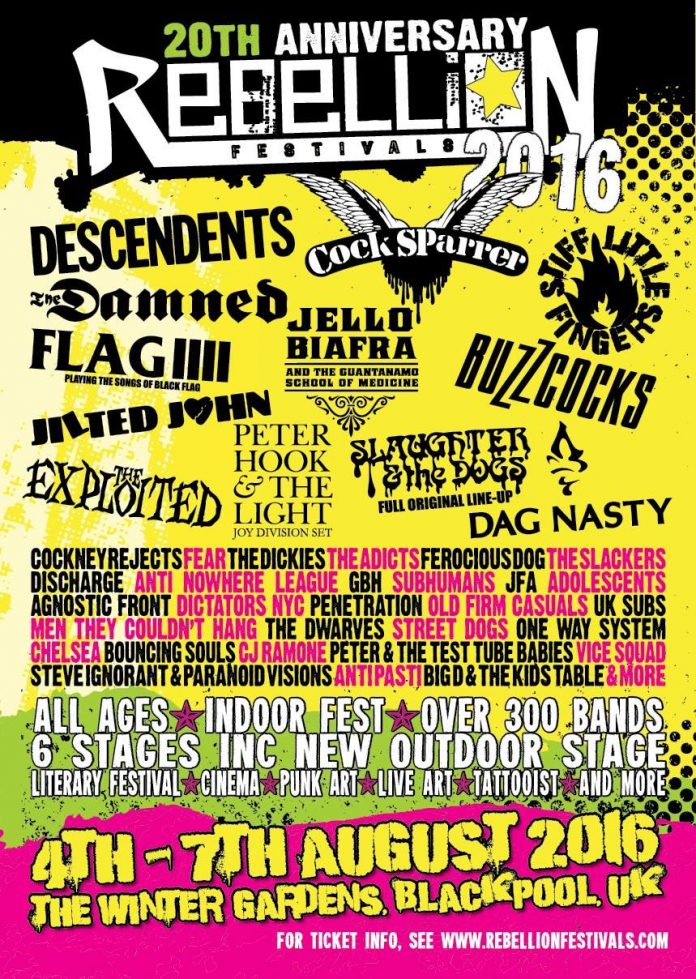 Iconic festival announces details of celebration
The iconic and now legendary Rebellion Festival is set to return this year between Thursday 4th and the 7th of August at Winter Gardens in Blackpool. The largest independent Punk & Alternative Festival in Europe, Rebellion started out in 1996 as the ‘Holidays In The Sun’ festival and this year celebrates its 20th year alongside the 40th anniversary of the initial punk explosion in 1976.

Throughout its history Rebellion has featured a large and diverse line-up that takes in every aspect of punk culture across the world and through the ages. This year is no exception with possibly the strongest line-up the festival organisers have assembled so far.

The sheer depth and variety of legendary punk bands confirmed to perform this year is positively over-whelming. As always the UK is represented by genre defining artists such as the Buzzcocks, Stiff Little Fingers, The Damned, The Exploited, G.B.H., Slaughter And The Dogs, Peter Hook And The Light (Joy Division set) Penetration, Cock Sparrer, UK Subs, Cockney Rejectsand Discharge. Whilst from the USA, a wealth of incredible bands are poised to play; Californian pop-punk legends The Descendents, in their only UK performance this year, take a highly-anticipated headline slot and join Dischord Records post-hardcore icons Dag Nasty, LA punk titans Fear and skate-punksJFA (all making it to the UK for the very first time). These, alongside the key members of Black Flag performing under the Flag banner, Dead Kennedysfrontman Jello Biafra with his Guantanamo School Of Medicine, Dictators NYC, The Weirdos, CJ Ramone, The Adolescents, Bouncing Souls andT.S.O.L. etc, ensure that the best of US punk is truly represented at Rebellion Festival in 2016.

“This is an exciting year for us,” says Rebellion promoter Jennie Russell-Smith. “2016 is a year of celebration. It’s our 20th year of putting on punk festivals and it’s also 40 years of punk – so a double celebration! We’ve got a bigger event than ever with more bands, new stages and lots of special things planned.

“With the 40 years of Punk anniversary there’s going to be a full year of events up and down the country with bands and independent promoters celebrating this amazing scene,” continues Jennie.  “There’s also of course the band waggon jumpers that will just be putting on a ’40 Years of Punk’ style gig and then disappear again the following year. Well, we’re proud that we’ve already started booking bands for next year, so we will be here in 2017 doing what we love when everyone is ignoring punk again. No five minute fashion for us.”

With six stages under one roof, there’s no chance of Rebellion being rained off like other festivals. The festival now incorporates the Opera House, one of the biggest theatres in Europe that will also be home to the literary festival, cinema and selected bands.

“We’re aware that money is tight for people and there’s lots of gigs to spend your money on, so this year we have brought in a system whereby people can pay a deposit and then buy their tickets in monthly instalments,” explains Jennie “We try to keep things as affordable as possible whilst still giving ourselves the budget to put on the event and book the bands that our punters expect of us.

“We can’t wait to open the doors on Thursday 4th August – this year is going to be special.”

Rebellion Festival is an ALL AGES event and children under 12 are admitted free of charge (accompanied by an adult) . We are a family friendly event.

More information and tickets available at: