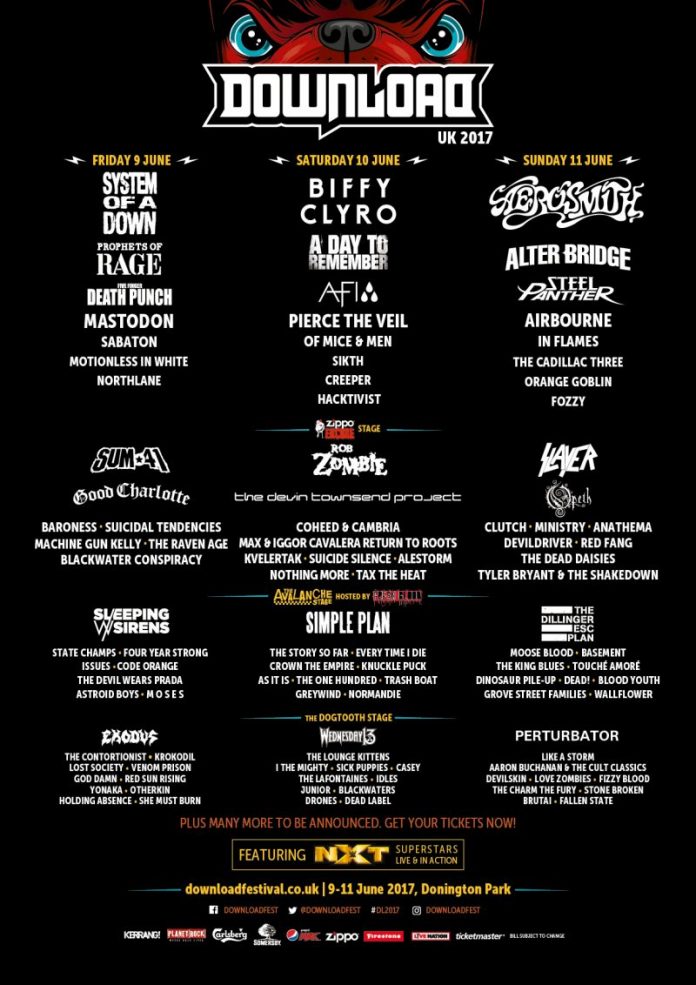 Download Festival, the world’s premier rock event has announced another plethora of bands, from legends and new talent alike, including Devin Townsend Project, Suicide Silence, Code Orange and many more.

Download Festival takes place on 9 – 11 June 2017 at the spiritual home of rock in Donington Park, Leicestershire. Tickets are on sale here.

New to 2017, The Avalanche Stage shines a spotlight on everyone from the biggest global acts, to the latest breaking bands. Headlined by the previously announced Sleeping With Sirens, Simple Plan and The Dillinger Escape Plan, the Avalanche Stage will be hosted by new music champions,Kerrang’s Fresh Blood.

“Right now, there is an undeniable, electric excitement about new music in the air and as soon as we saw the new Avalanche Stage we just had to be involved. It was clear from the get-go that one of The Avalanche Stage’s aims was to ensure that there was a dedicated space for these new bands within the festival. Download has always been amazing at supporting new talent and I’ve always admired them for that – so it was a no brainer to get as involved as much as humanely possible!”

On playing the festival, Devin said: “Download! Amidst a crazy year, we have been invited to play at one of my favourite festivals in the world. The band is rocking better than ever, and we are fired up to have some fun with you guys. We look forward to blowing the roof off the place. See you there!”

The hottest name in hardcore, Code Orange are torchbearers for their genre and will excite festival goers with a crushing set. Twenty years on from the release of ground-breaking album Roots, Max & Iggor Cavalera reunite to perform the seminal record in its entirety to the Download crowd.

Having influenced heavy music with their rapid twin vocal and tech metal, groove masters SikThwill bring the Main Stage mosh pit to life. Deathcore stalwarts Suicide Silence are back with tracks from their eponymous fifth album and are set to deliver an incomparably powerful live set at Donington this summer. Joining them are unmissable supergroup elite, Krokodil who are set to impress with their immensely forceful metal, and UK stoner rock legends, Orange Goblin with their heavy hammer, steel toed riffs and fistfuls of attitude.

Renowned for his wild live shows and fiercely loyal fan base, Ohio rapper Machine Gun Kelly has received waves of critical and commercial success with sophomore album General Admission, which he’ll be bringing in abundance to Download this June. Aussie rock heroes Sick Puppies will serve up their tooth rattling rock and hard hitting hooks that will send the Download crowd wild. Led by the incredible Johnny Hawkins, San Antonio rockers Nothing More have cemented themselves in the top echelons of modern rock and will be bringing their ferocious live performance to Donington.

Having previously supported Iron Maiden, metalcore outfit The Raven Age stride between melody and brute force, and will be returning to Download for another epic performance. They’ll be joined by tour de force of energy, Yonaka, and country rock n’ rollers Blackwater Conspiracy.

The dark and volatile Perturbator completes the trio of Dogtooth Stage headliners alongside the previously announced Exodus and Wednesday 13. Prepare to be lost in his technoir, dark synthwave as he closes the Dogtooth Stage for 2017. Dublin’s grunge pop rockers OTHERKIN will riff their way through infectious songs with a raucous energy, whilst London five piece, Drones will be out to deliver a barrage of hardcore punk for the Download Festival audience.

Download Festival is the home of rock music and takes place on the sacred grounds of Donington Park, which have been associated with rock since the eighties. The festival attracts rock icons to its Main Stage, plus some of the best and hottest new acts in the world. AC/DC, KISS, Metallica, Def Leppard, Guns N’ Roses, Rage Against The Machine, Slipknot, Linkin Park and many more have all headlined its Main Stage.