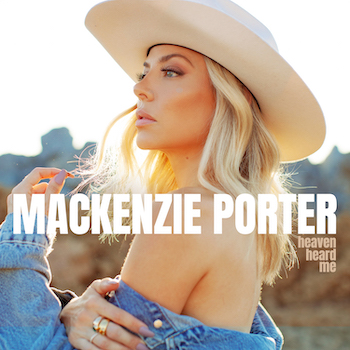 Big Loud Records’ Country riser MacKenzie Porter releases a new song draped in whimsical sincerity, ‘Heaven Heard Me.’ The heart-warmer was co-written by Porter along with Steven Lee Olsen and David Cohen and produced by the award-winning studio ace Joey Moi. Drawing inspiration from her husband, Jake Etheridge, the newlyweds were married during the pandemic as announced exclusively by PEOPLE.

“‘Heaven Heard Me’ is a song I wrote about my husband, Jake [Etheridge],” explains Porter. “I’m a person who always feels unsettled and anxious, and Jake is the person who quiets that in me. I hope when you hear this song that it makes you think about your ‘person.’ I love writing sad songs, but sometimes you just have to write what’s right in front of you.”

‘Heaven Heard Me’ comes on the heels of ‘Unlonely Me,’ marking two of the three tracks Porter is slated to drop this year. Partnering with PEOPLE for the premiere of the “Unlonely Me” music video directed by Justin Clough, the cozy vintage theme painted quarantine-nostalgia in a light-hearted way. The CMT’s Next Women of Country Class of 2021 member is currently on the BUY DIRT TOUR with Jordan Davis while her single ‘Thinking ‘Bout You’ with Dustin Lynch is nearing Top 10 at US Country radio. Porter recently collaborated with rising Pop artist Virginia to Vegas on new single ‘this sucks’ produced by Mike Wise (Ellie Goulding, Britney Spears, Backstreet Boys, Jamie Blunt). The track tells the story of running into an ex at a party and seeing them happy with someone else, driven with a quintessential Pop beat but feels melancholy at its core. Porter is Canada’s #1 most played female voice in Country music and Baker (Virginia to Vegas) is the second most played Canadian artist at radio (behind the Weeknd), making this on-the-rise single one explosive combo.  As announced earlier today, Porter will take the stage at the 2021 CCMA Awards to perform ‘Thinking ‘Bout You’ with Dustin Lynch and will vie for FOUR awards: Entertainer of the Year, Female Artist of the Year, PRS Guitars Video of the Year (‘Drinkin’ Songs’) and Fans’ Choice.

She was also nominated for Country Album of the Year at the 2021 JUNO Awards.