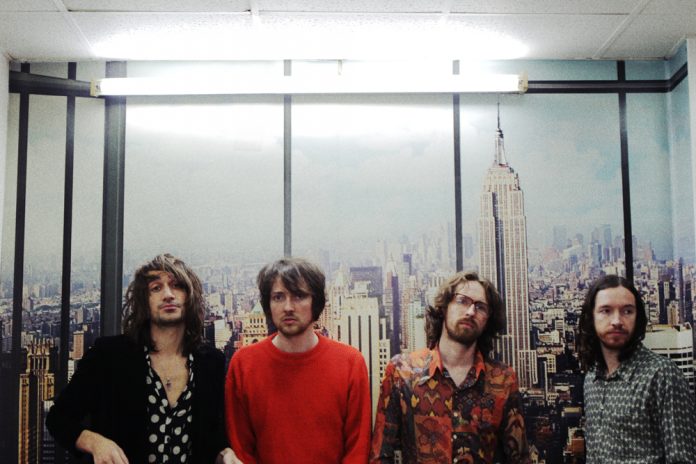 Analog fixated mob drop new track
Drawn together by a mutual fixation with all things analog, Australian/UK collective Gentlemen have rapidly gained kudos as one of London’s most exciting upcoming acts.  Now they have a launched a new video for their latest single ‘Stray Rider’ which is described as ‘kind of like if America’s original tan king George Hamilton stormed off the set of dynasty in a fit of rage, due to a contract or catering dispute and ended up walking the streets of the London suburbs with his Minder.’
Looking for thrills and taking care of business the video, according to the band, ‘culminates in a surreal Lynch-esque gathering where our very own tan king, Nigel Barber along with Minder, Roshan Singh are joined by Franz Ferdinand’s Nick McCarthy, channelling Agent Dale Cooper’s long lost twin brother.    We recorded much of the album at Nick’s studio ‘Sausage Studios’, he also happens to be our neighbour so wanted to have a cameo/homage to the man himself… I’ve always thought he looked like agent dale coopers long list twin brother, so was kind of a bizarre dream come true… Maybe they can incorporate him into the new twin peaks season…?’
Debuting with the self-produced, film-noir inspired double EP Night Reels, they soon earned nods from the likes of The Guardian, Zane Lowe, BBC 6 Music, KEXP, The 405, The Line of Best Fit and NME, followed swiftly by an invitation to record a Daytrotter session. The band’s prog-riff-laden third single “Gentle Duke” excited Zane Lowe to such an extent he treated his BBC Radio 1 listeners to his own live-to-air remix.
Their most recent intensive studio adventures have found them channelling deeper and groovier regions of their record collections and psyches. The resulting new single ‘Stay Rider’ sees Gentlemen emerge with a bolder and wiser sound, and a freshly tuned line up.
Out now, the single also features a cover of Electric Light Orchestra’s ‘Showdown’.
Gentlemen will launch their new single in London live at Paper Dress Vintage in Hackney on Wednesday 7th December.
facebook.com/gentlementheband
http://gentlemengentlemen.com/