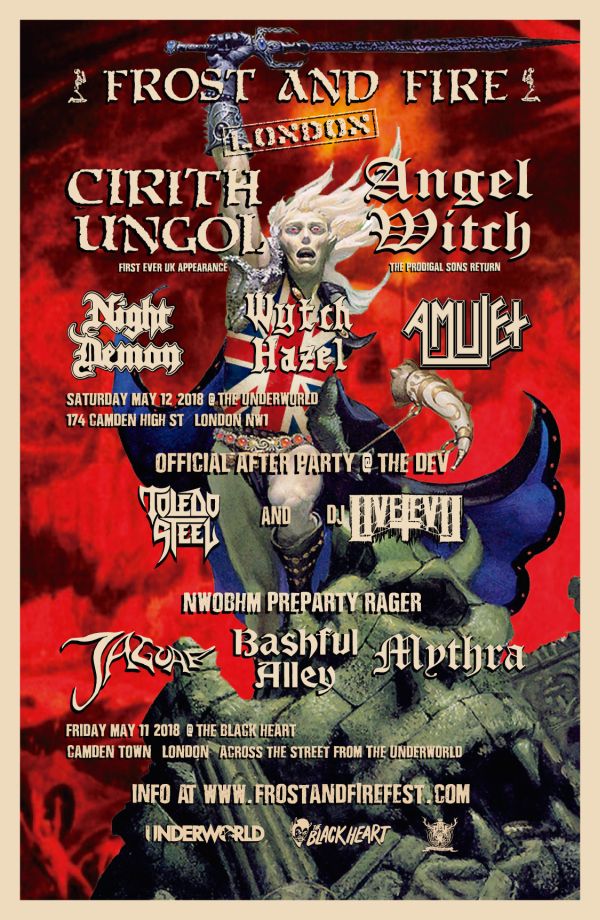 CIRITH UNGOL will make their UK debut at the inaugural Frost And Fire London Festival.

They will co-headline the two day event alongside Angel Witch at The Underworld, Camden on Saturday May 12, 2018. Also on the bill are Night Demon, Wytch Hazel and Amulet.

Check out the other activities planned over that weekend below:

A 9-band 3-venue 2-day mini-festival has been announced, taking place in Camden on the 11-12 May, 2018. Frost and Fire kicked off in California three years ago and this year sees the event cross the Atlantic for the first time. If you like your metal very much old school, this definitely looks like one to check out.
Organiser Night Demon say:

We are simply expanding the Frost and Fire concept to cross the Atlantic and pay tribute, fittingly enough, to the cradle of the NWOBHM movement. It is an honor and a privilege to bring Frost and Fire to the UK to make history on English shores.

Headlining the festivities at The Underworld on Saturday, May 12, will be California’s legendary kings of the dead, Cirith Ungol. After a string of wildly successful reunion shows in the United States and continental Europe during the last two years, Cirith Ungol will be making their first-ever UK appearance at Frost and Fire London.

Also co-headlining on the bill are revered NWOBHM pioneers Angel Witch returning home for the first time in years, fast-rising American upstarts Night Demon, and a pair of acclaimed young British bands well-versed in the ways of the olde, in the form of Wytch Hazel and Amulet.

After the music ends at The Underworld, the party continues one block north on Kentish Town Road at The Devonshire Arms (affectionately known as “The Dev”). This official After-Party will feature DJ Live Evil as well as Southampton’s own Toledo Steel, playing their album release show to commemorate the release of their eagerly anticipated full-length debut, No Quarter, via Dissonance Productions. FREE ENTRY!

Festgoers are strongly advised to make plans to be in London a day early to attend the NWOBHM Pre-Party Rager on Friday, May 11. This special event will be held at The Black Heart, conveniently located across the street from The Underworld in Camden Town. The Pre-Party will include performances from a trio of legendary NWOBHM acts, namely Jaguar, Bashful Alley, and the mighty Mythra.

Tickets are on sale now at www.frostandfirefest.com, Dice and the venues themselves (see below). These intimate venues have strict limits to capacity. Tickets will go fast, and all Frost and Fire London events will sell out. So buy your tickets now or risk being left out in the cold.

Frost and Fire London will not supplant the original Frost and Fire festival in southern California in October 2018. Stay tuned for announcements about Frost and Fire IV in the coming weeks.
FROST AND FIRE LONDON PRE-PARTY – Friday May 11, 2018 (6:00pm)

There will be only 100 presale tickets available from Dice

There will be only 400 presale tickets available online from Dice

There will be only 100 presale tickets available at The Underworld