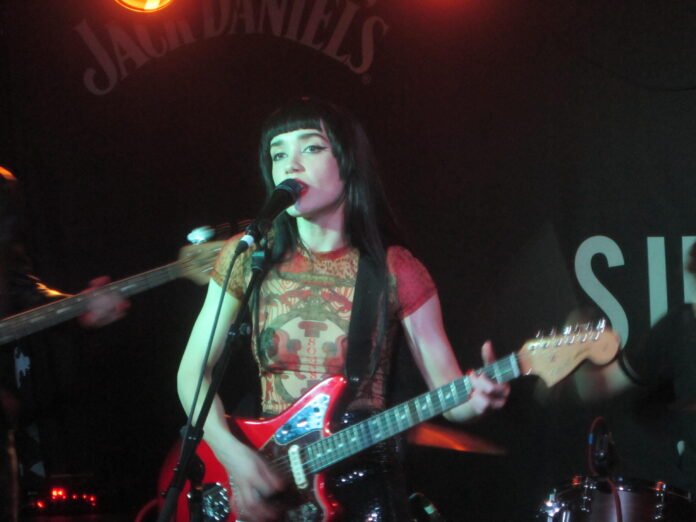 Freya Beer is a singer-songwriter from West London and has been hailed as a “raw and thrilling new talent” who mixes poetic lyrics inspired by Allen Ginsberg and Charles Bukowski. Her debut album ‘Beast’ dropped last month and I have to say I loved it. So, i had a sense of excitement in getting to see her and her band so quickly after its release and hear these songs fleshed out in a live situation.

There was little fuss as the band took to the stage and shared title track `Beast` with its tribal drumbeat which is the perfect platform for the singer`s vocal prowess. The faster paced `Beauty` follows before one of my favourites `The Calm Before The Storm` with its buzzing guitar riff heartbeat is blasted out.

There was a brief discussion on stage before it was agreed that `Arms Open Wide` was next with its somewhat captivating Middle Eastern vibe. The slightly disturbing but compelling `Secret Garden` is aired before Freya puts down her guitar and plays a new song in `Love Child` and it’s only the second time the band have played it and on first hearing it seems to have retained the high standard that this artist has set.

Things slow down for a few minutes as we enjoy the stark beauty of `Pure` before its cranked up again for the enticing `Siren` and quite mesmeric almost dreamy `Forget it`. We have `To The Heavens` which again is wonderfully spellbinding.

`Put It To The Test` opens with a brief almost biblical poetic discourse before it draws you into its web as it stops and starts as it evolves from its embryonic journey. The set is more or less closed out with the edgy `Dear Sweet Rosie` a dark and little unsettling offering but Freya and the band gives us an interesting cover of one of my heroes. the seventies psychedelic glam rocker Marc Bolan and T. Rex`s `20th Century Boy`

There are shouts of more from this intimate crowd but the band have exhausted all their material in this superb forty five minute set.

I have to say I really enjoyed this live outing and Freya reminded me of two great singers who have championed the way for the female chanteuse in Susan Janet Ballion, known professionally as Siouxsie Sioux and Polly Jean Harvey and I only hope she gains some of their success, she certainly deserves it.