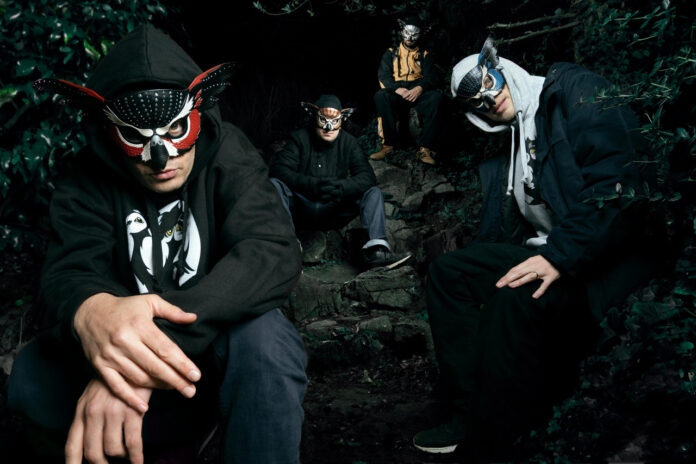 Hip-hop collective The Four Owls have announced their ‘Nocturnal Instinct’ UK tour for this Spring.
The four-piece will be taking their honest and deep-diving brand of hip-hop to venues across the UK this April.
With stops in Leeds, Manchester, Birmingham, Cardiff, Bristol and London, the tour comes in support of The Four Owls’ thought-provoking and emotive third studio album ‘Nocturnal Instinct,’ released in 2020.
Formed in 2011 by Leaf Dog, Fliptrix, Verb T and BVA, the foursome perfectly demonstrate the age-old idea that you can’t choose your family but you can choose your friends. Crafting an honest bond of brotherhood that spills out into the music, the collective’s signature sound is hip-hop in its purest form.
Combined, the collective have well over 200 million streams across YouTube & Spotify and 500+ live performances to their name both domestically and around the globe. Their music has been supported by the likes of DJ Premier, Mistajam, Charlie Sloth, DJ Target, Toddla T, Conway The Machine, Westside Gunn, U-God (Wu-Tang), Havoc (Mobb Deep), Skinny Man, Rag’N’Bone Man to name a few, as well as Hip-Hop fanatic, comedian Romesh Ranganathan.
*****
The Four Owls ‘Nocturnal Instinct’ UK Tour
The Warehouse, LeedsWed 13 Apr 2022
Club Academy, ManchesterSat 16 Apr 2022
The Mill, Birmingham Wed 20 Apr 2022
Tramshed, CardiffThu 21 Apr 2022
Marble Factory, BristolFri 22 Apr 2022
Scala, LondonTue 26 Apr 2022
Tickets on sale here.