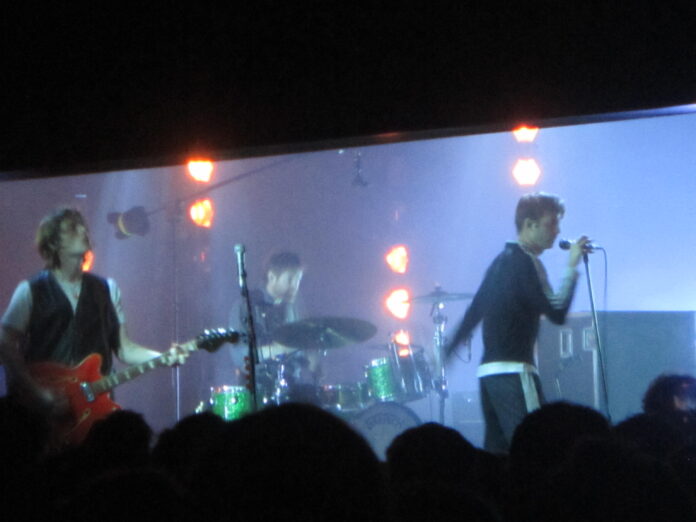 Tonight, it felt like I’d attained the Golden ticket but it wasn`t for Willy Wonka`s Chocolate factory but one of the most eagerly awaited tours this year that of Dublin`s post punk heroes Fontaines DC. As the lights dim we have Birmingham electronic band Broadcast`s `I found the F` playing through the pa as the band take to the stage, a subtle but clever nod to this city`s musical heritage and to one of the band`s musical inspirations.

This evening was a blend of the old and new with cuts from each of the band`s two albums `Dogrel` and `A Hero`s Death` with the title track from the most recent release up first with its hypnotic mantra of “Life ain`t always empty”. The cacophony of noise that is` A Lucid Dream` follows with `Sha Sha Sha` and `Chequeless Reckless` from the debut album and singer Grian Chatten prowling and circling a space on the stage as if he is marking a boundary that must not be crossed. It was heartening to see that he looks to have put all those anxieties aside that befell him as a lot of expectations were made about the band and its future.

The guys share a couple of lighter but still immensely powerful numbers with `I Was Not Born` and the wonderfully mature `I Don`t Belong` which to me is an overwhelming composition. We enjoy more rockier guitar based offerings with `The Lotts`, `Living In America` and the delightfully mesmeric `Hurricane Laughter`.

The homestretch has the churning `Too Real` with the crowd screaming out the lyrics, the pounding thumping swaggering `Big`, edgy `Televised Mind` and ending with the more garage rock tinged `Boys In The Better Land`.

It`s not too long before the band return and leave us with a couple of tunes that were written about their homeland, the tenderly reflective `Roy`s Tune` and `Liberty Belle` a homage to the Liberties, the neighbourhood in Dublin where a few of the guys called home when attending the British and Irish Modern Music Institute.

Tonight, was my first opportunity to finally witness these guys in a live situation and I have to say they delivered. How can you describe it? A kind of evening where urban poetry is shared with the intensity and musical backdrop that is worthy of bands such as The Strokes and the Prodigy.

Where next for Grian, Carlos, Conor, Conor and Tom, these Sons Of Erin?? Well, they were due to play Glastonbury`s 50th anniversary but Covid put paid to that. It would seem that their third album is already in the can, with possibly a couple of disco inspired tracks and we may hear something this side of Christmas and a fourth album some way along. There`s even been talk of a

Collaboration with rapper Slowthai. Who knows? but the trajectory of this band is definitely upwards and this tour may be the last for us to witness them perform in these three thousand capacity venues.