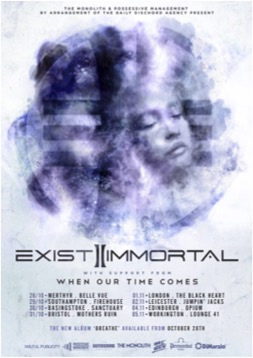 The tour kicks off on release day, running for eight dates, including shows in Southampton, Bristol, Edinburgh and a stop off in the capital with a date at The Black Heart, Camden. The band will also be performing at this year’s Euroblast Festival alongside the likes of Born Of Osiris, Veil Of Maya, Heart Of A Coward and many more.

The band also recently released their latest single ‘Follow Alone’, taken from their brand new album Breathe, out October 28th. The follow up to their debut 2014 release Darkness Of An Age, its eleven tracks are prime examples of genre-spanning, hook-laden melodic metal, which are both unique and imaginative in their approach and execution.

Following the band’s signing to Primordial Records, front man Meyrick de la Fuente said,“Really happy we’ve signed to Primordial, it’s awesome to be working with a group of people that share the same vision as us for the music we are making. We can’t wait for people to hear this album!”

Having a background as artists and music lovers themselves, Primordial Records founders Alex Boezeman and Vincent de Bruin make it their mission to truly support their artists and treat them like family. Alex had to say of the signing, “I’m super stoked to announce Exist Immortal as the first band on our Primordial Records roster. I have been following them for a good few years and they are one of the most promising bands in their genre at the moment. Their new record is a personal favourite and I couldn’t wish for a better fit to launch Primordial Records with.”

Since releasing Darkness Of An Age in 2014, the band has been working tirelessly, expanding their reach and building a solid, dedicated following. Performing at a range of festivals, countless tours, and sharing the stage with some of the biggest names in the underground, from SikTh and Heart Of A Coward, to Fallujah and Circles, their brand of modern metal has so far taken them the length of breadth of the UK, across the vast majority of mainland Europe and as far as India.

With the album fast approaching, 2016 is shaping up to be a defining year for one of the country’s most exciting young metal acts.

Previous article
Secret Mission
Next article
Wait Is Over