“I believe we’ve matured as songwriters and musicians, and the new album reflect this”, states frontman Lawrence Case, “As much as we loved making the first album, last year’s EP was a hint of what was to come next, and we knew we had it in us to deliver the best album possible. And thanks to 2 years of touring around the UK and Europe, supporting some killer bands and learning so much from them and about ourselves as musicians and human beings, we’ve crafted ‘Freak Show Candy Floss’ and we couldn’t be happier with the results.”
This new album by Voodoo Vegas rocks hard, whilst maintaining its roots in real life, wax lyrical topics. From the powerful swagger punch of ‘Backstabber’, to the acoustic intro chords of ‘Resolution’ (a song that takes you on a foot stomping, funked up journey), the venomous, bluesy bite of ‘Poison’ ticks all the key blues / hard rock boxes, whilst the sublime acoustic ballad ‘Sleeping In The Rain’ tackles the emotional subject of homelessness. Be sure to check out the music video for lead track ‘Killing Joke’, the band’s vision of a sick twisted society (“Nobody’s laughing, they’re smiling through the pain”) is a psychedelic visual treat . Final track on the album ‘Walk Away’ is the heaviest song Vooodoo Vegas has put to record, and showcases how well Voodoo Vegas mix the light and shade of hard rock music (“We wrote that in the final week of album pre-production, it’s one of those songs that grabs you by the scruff of the neck and it demanded to be on the album”).

As the album artwork and new band photo demonstrates, Voodoo Vegas have created a big top, circus ambience, something that’s been done to highlight what it’s like to be in a working band like VV in 2016.

“The name ‘Freak Show Candy Floss’ comes from the idea that people who don’t live in this music world can’t understand why we travel for hours and hours only to play music for a short amount of time”, says Case, “Some people think we are crazy, insane, maybe even FREAKS! The name Freak Show Candy Floss comes from that, we are crazy, we are insane, we are FREAKS who love writing and playing our music, and the candy floss is the music and gigs we play, it’s there, it tastes so sweet, but then it’s gone so quick just like candy floss.”
Talking of freaks, Voodoo Vegas talisman Jimmy Silver returns to the album cover, as the ring leader to the Freak Show Candy Floss Circus.

Recorded at Los Rosales Studios in Moralzarzal, Spain, ‘Freak Show Candy Floss’ was engineered and produced by Guillermo “Will” Maya (The Answer).

“‘Freak Show Candy Floss’ is the first music written entirely with the new Voodoo Vegas line up.  Where some bands find it hard to write their sophomore album, Voodoo Vegas had a ton of energy going into the writing of this album and it didn’t feel like writing our second album, it felt like this was our first. Working with Will again (Maya produced last year’s ‘Hypnotise’ EP, which featured the debut of this current line up) was a no brainer. The man has helped us craft our best work yet and we’re all looking forward to what happens next”, says the band. 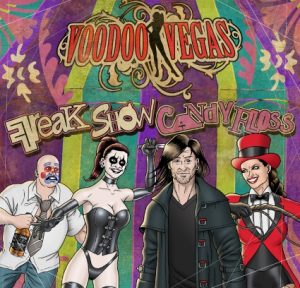 The new Voodoo Vegas album is officially released via PHD on Friday the 4th of November.