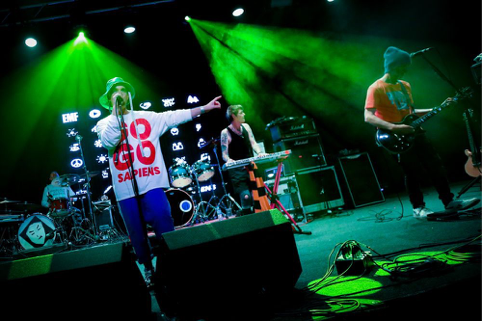 “A song about the journey of life that we as a band have been travelling on over the last three decades. The best of times and the saddest of times losing close friends along the way. A song about time passing in the blink of an eye and how we should live it to the fullest.”

The SPARKS AND FLASHES single includes 4 further mixes and a special mix of Greatest Day;

To order SPARKS AND FLASHES go to : https://shopemf-theband.com/

EMF are set to play six club shows in January 2023, starting at the Globe in Cardiff on Thursday 12th and concluding at The Garage in London on Saturday 21st.

Playing live has always been a highlight for EMF and with the new songs from GO GO SAPIENS added to live favourites from earlier in their career, the live set is rich and varied. “We have never been happier playing shows. You may catch the dark, rave-rock re-invention of our hit ‘I’m a Believer’ that was such a success in the Bestival set and there will be a surprise song or two from other eras of our career. The warmth, passion and energy the fans have come to expect at an EMF show is guaranteed, as is the sheer joy and chaos that hit ‘Unbelievable’ provokes. We can’t wait to get out on tour in January.”

“We have asked the fans for suggestions and have some great ones already like London Calling and True Faith for Manchester the home of New Order. We won’t decide till nearer the time when we have all suggestions. Every gig is special to EMF but it’s going to make each night unique in a way that connects with the place we are playing.”

Get signed up to the email list at EMF-theband.com to get all the news.

There’s something indefinable but very special about GO GO SAPIENS that makes it irresistible.