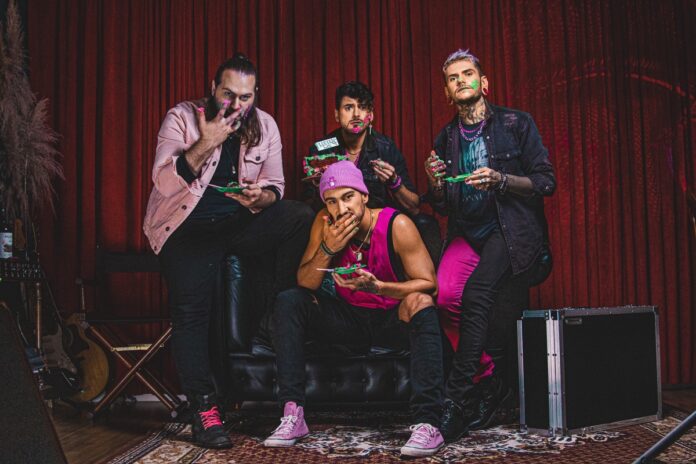 Frontiers Music Srl is pleased to announce the release of ‘2 Make U Cry & Dance’, the second album by the Brazilian rock n’ roll juggernaut that is Electric Mob. Out on 27th January 2023, a new single and video from the record for the song ‘By The Name (nanana)’ is available from today. It follows the recent introductory single ‘Sun Is Falling’, the video for which can be seen HERE .

Electric Mob stormed onto the scene in 2020 with the release of their (no pun intended) electrifying debut album ‘Discharge’, wowing listeners with their modern take on classic bluesy hard rock executed with heartfelt, soulful musicianship and monstrously huge vocals. This follow-up effort sees them take a massive leap forward on what is truly an all killer, no filler affair and a release that is proof positive that high quality rock ‘n roll does not adhere to any geographical borders.

The album title is a reference to certain lyrical content that reflects on the hard times we all go through in life, although the music itself is simultaneously high energy, spirit lifting and designed to make you….well, dance.

Formed in Curitiba by Renan Zonta (vocals), Ben Hur Auwarter (guitar), Yuri Elero (bass) and André Leister (drums), Electric Mob initially attracted the attention of Frontiers with their superb hard rock songs that displayed the influence of contemporary hard rock giants while also showing an in-depth knowledge of the hard rock pillars of the ’70s and ’80s. Comprised of four young and hungry talents with the rock ‘n roll attitude to deliver explosive performances, they are a sonic punch to the face, while their songs are a mixture of powerful vocals, mean guitar riffs and heavy groove with influences from the ’70s, ’80s, and ’90s. There is no doubt that Electric Mob is leading the charge to put Brazil on the rock ‘n roll map.