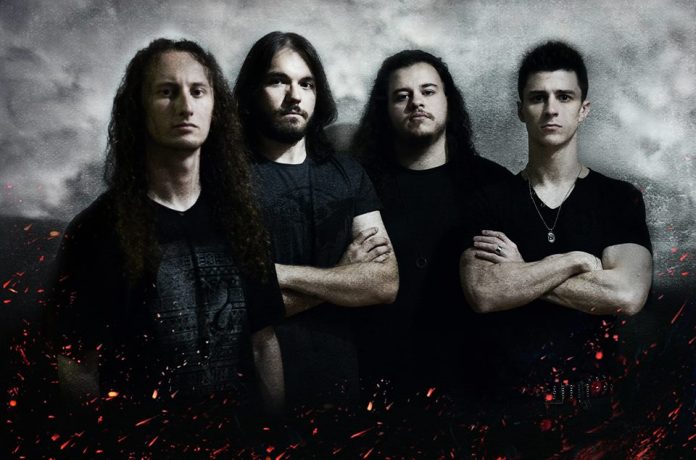 Brazilian progressive/power metal outfit, Daydream XI, has launched a live instrumental video of the new song “Painted Smile” which will appear on the band’s upcoming concept double album The Circus of the Tattered and Torn. The video, filmed at a recent full-band rehearsal, is released in conjunction with an ongoing PledgeMusic crowdfunding campaign for the new album (http://www.pledgemusic.com/daydreamxi).

Guitarist/vocalist Tiago Masseti says: “As a thankful message to everyone who’s been supporting the band and the PledgeMusic campaign, we decided to capture a live studio performance of a new song. It’s instrumental for now, not to spoil too much. This song is one of the first ones I’ve written for the new album, and it really helped to establish the tone for the new record. It’s got some fast power metal drums as in the older songs, but on top of heavier and darker riffs. It’s also pretty responsible for the whole circus theme of the album. The lyrics to come are about the classic irony of the clown who makes people laugh but is broken on the inside.”

The Daydream XI PledgeMusic campaign will continue for another 30-plus days, offering fans access to exclusive PledgeMusic items including personalized postcards, signed CDs, songbooks, music lessons, personalized ring tones, intimate concert experiences and more. The new music will be delivered to Pledgers in June, months before the general album release. 5% of any money raised after the goal is reached will benefit The Wild Animal Sanctuary (http://www.wildanimalsanctuary.org/), the world’s largest carnivore sanctuary, home to hundreds of wildlife rescued from captivity.

Daydream XI commented: “We are launching a PledgeMusic campaign so that we can connect with the fans directly, with exclusive materials and some really cool items for anyone who pledges. From Skype lessons to personalized ringtones, from a barbershop choir thank-you-message to even songbooks entirely transcribed by ourselves, we have put a lot of effort in creating this so that all Daydreamers can have a one-of-a-kind experience with Daydream XI and get to be a part of this circus of freaks. And you can get your hands on the album before everyone else does.

“’The Circus of the Tattered and Torn’ is the follow-up to Daydream XI’s debut album. It is a conceptual double album with great doses of progressive, heavy and deeply emotional music, tinkering with a dark concept regarding the flawed humanity in us all. The songs are heavier and more dynamic than they were before. It shows a lot of new sides of every one of the four members of the band – going from chaos to order, from light to dark, from soft to heavy, just like a circus performance.”