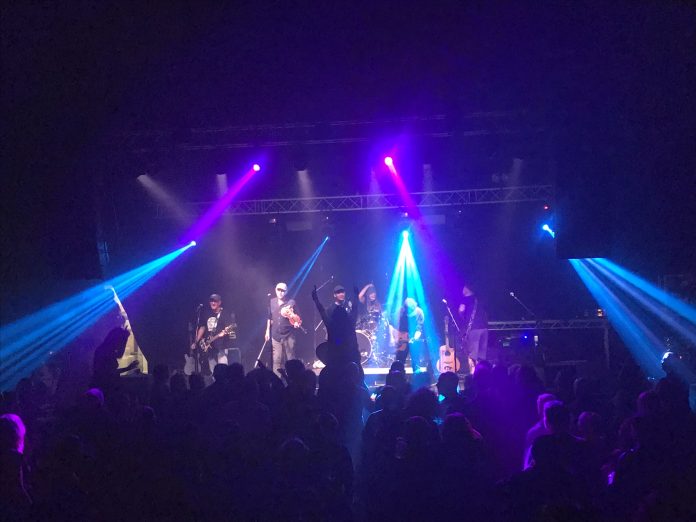 You have to admire anyone who stands up there solo and does the singer/songwriter thing. Even more so if they say: “hi I’m Jake, I sing songs. Sometimes I do it well, sometimes I do it badly. Let’s see how this goes.” Happily for the fella, this is one of the former. Let’s not kid ourselves, there’s a bit of Frank Turner about “Introducing”, but then “The Revolution Is Always Late” is exactly what a modern protest song should be. Martin’s targets hit the zeitgeist of the times too, “Mountains” takes on social media, “May Your Venue Never Die” is self-explanatory, but no less vital in this day and age. As a more over-arching point, though, the Brighton boy just loves a singalong. “For Fucks Sake Jake” cheery and self-critical as it gets and “We Sing The Words All Wrong” palpably is incorrect in the assertion as throats are cleared in unison. The attitude is king here, though. “I don’t do this to make money, just friends” he says. Job done, then. 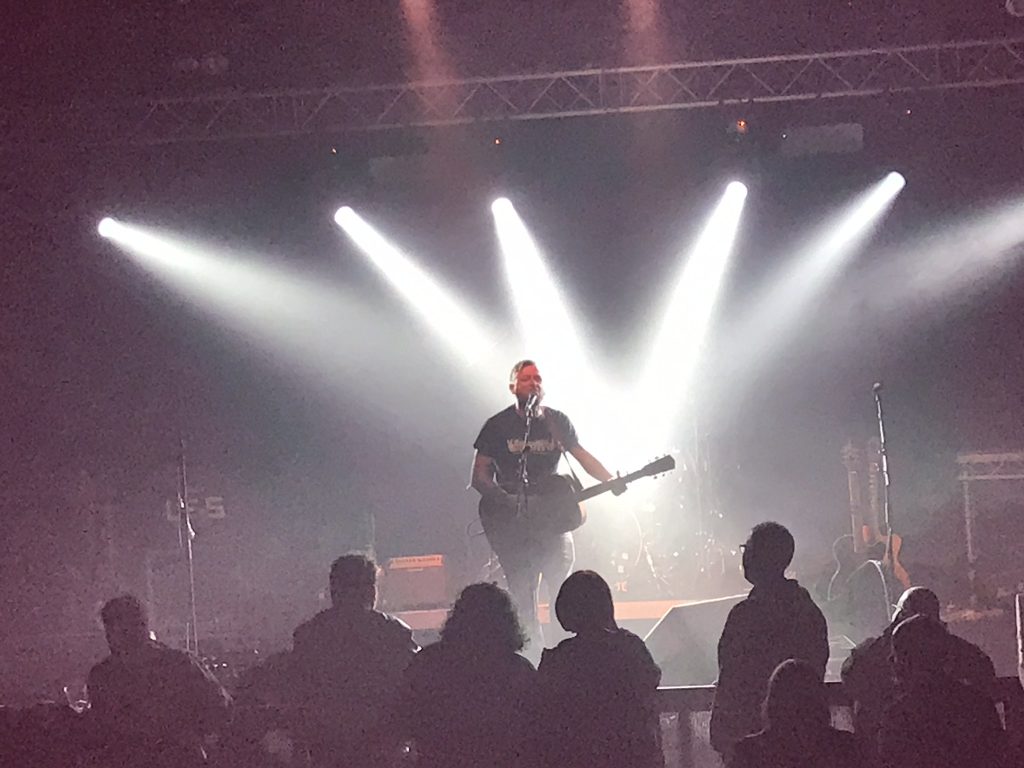 Maybe it’s just a night for self-deprecation? Paul Henshaw – here tonight with one of his band the Scientific Simpletons and Matt provides sterling guitar and mandolin – shouldn’t have been here at all but Laura from She Makes War was poorly. Celebrating this he says: “I’m here to play songs you don’t know”. He’s right, too, I’m not gonna lie. But good god, if you’re going to play a song about your 77-year Old Nan taking you to an Iron Maiden concert then you’re deserving my attention. Elsewhere things aren’t as knockabout. “Kid On A Bridge” features Ferocious Dog’s Dan Booth on violin and highlights suicide with realism and passion. “Towards The Waves” from a forthcoming new record is superb, “Wild Turkey” sees whiskey produced (it is Friday night after all) before “Hometown King” takes down a bloke with an inflated ego called Andy (I’ll say nothing….). A fine set at late notice, Henshaw is doing this on his way to Rotterdam tomorrow: “it could be Liverpool or Rome” he says. Well it’s beautiful, down south isn’t it? 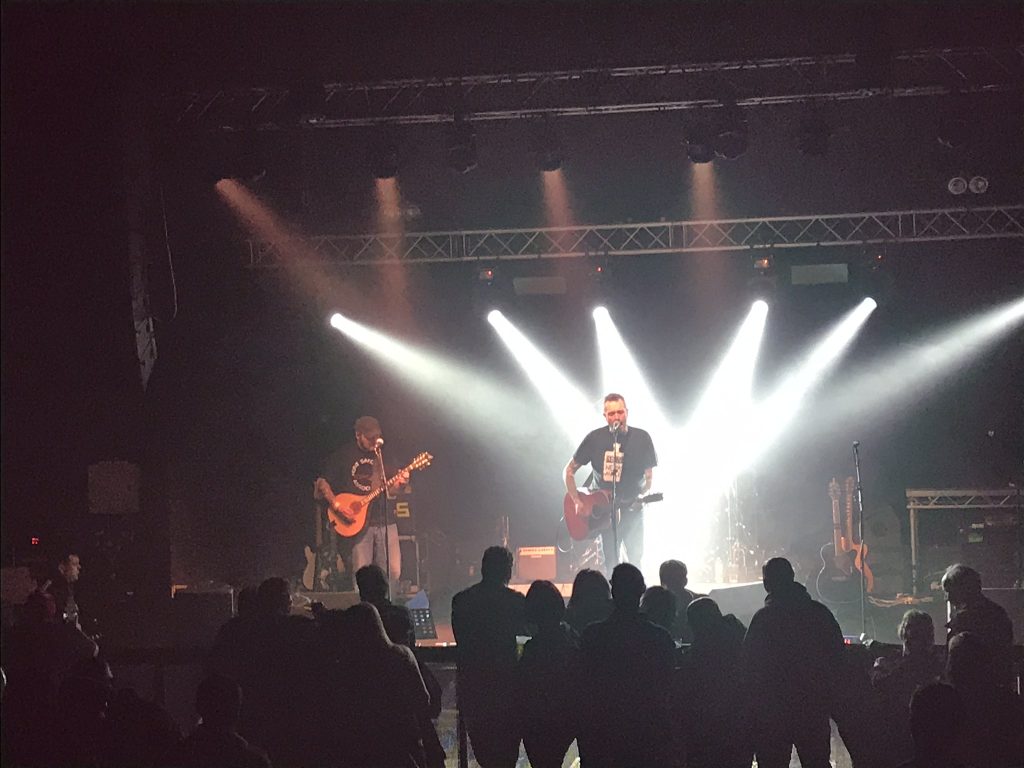 Ferocious Dog are about three songs into their set, and I happen to look down on the dancefloor from the small balcony where I am sat. Everywhere I look there are people dancing. Literally dancing together in a way that you barely ever see at a gig.

That’s worth a mention, because it really does explain the atmosphere in here tonight. There are old school punks, blokes in Motorhead T-shirts, and all ages. To all intents and purposes, Ferocious Dog are basically creating a festival vibe on a cold, damp night in an indoor venue. And that, really takes some doing.

But the skill of FD is that they wrap this up in a message too. Whether its “Black Leg Miner” – which strikes a personal chord with me, given that it was watching the miners strike as a little lad on tv that mostly shaped the politics I hold dear to this day – or “The Glass” which strikes a very obvious chord with everyone here.

Sung as always in honour of Ferocious Dog singer Ken Bonsall’s son Lee, who tragically took his own life after serving in Afghanistan it provides a poignant moment amongst all the fun, but it is one which is also vital for the sense of community that pervades throughout.

Such communal moments are many. “Too Late” (“this one is for the ladies”, shouts the newly – well, since I saw them with The Wildhearts anyway, shaven headed Bonsall) brings one, but is too an example of the skill of these six musicians.

The likes of “Lyla” and the beautiful “A And B” slow the pace, but there is a real sense of anticipation about “Fake News” the near title track of their forthcoming record, which spits bile all over the mainstream right-wing media.

“Gallows Justice” and “Traitors Gate” pass by in a wave of fury, “Quiet Paddy” is a real punk rocker, but “Hell Hounds” seems to take on the air of something nefarious, not too far from the Urban Voodoo Machine, say.

The encore says all you need to know about tonight specifically, and the band as a wider point. “Johnny I Hardly Knew Ya” is covered by many, but made their own by few like this, “Black Gold” is a vicious attack on the British Empire and “Slow Motion Suicide” an even more withering put down of a man failed by successive governments and the breakdown of society.

But, this is played in such a fashion that Dan Booth does his violin solo from the pit and Guitarist John Leonard gets on a roadies shoulders and goes for a wander around to meet his people. Red wine, I think, was involved in this, but whatever.

So whilst the message is clear, of course, this is entertainment first and foremost and watching Ferocious Dog is an uplifting experience. The festival band, perhaps, that brings the festival to you. They are one of a kind.

Previous article
HRH AOR IS A OK
Next article
BAND OF THE DAY: THE GALLERY