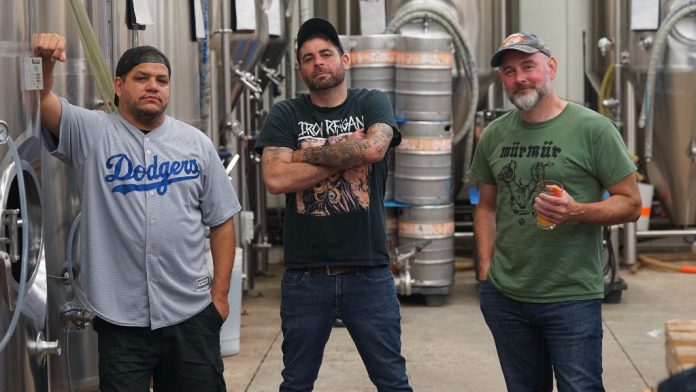 Trappist formed in 2014, originally slated as a studio-only project.  As Chris tells us

Ryan and I jammed a few times with the objective to create a simple early Discharge style band with all songs about beer… picture Xeroxed WWII photos with all bombs replaced by beer bottles, cans, and kegs.

Crusty punks who listen to d-beat are usually vocal in their anti-corporate stances, yet still tend to drink shitty corporate beer without issue.  Ryan and I had a shared love for microbrews and hardcore punk so we decided it was time to unite the two, focusing on the importance of supporting independent beer.

I started out playing guitar, but soon after I remembered how restricted my guitar abilities are (i.e. I have no aptitude for playing the solos I wanted on these songs).

After a couple not-so-productive years, I recruited my old friend & former Despise You bandmate Phil Vera to take over on guitar.  Things rapidly improved. We practiced more often. Song writing was stronger & more diverse.  This was the kick in the ass we needed.

The three of us host a regular podcast called “Hour Of The Barbarian”.  We drink beer and ramble on about recent trips, tours, shows, food, fucked-up experiences, and also bring up some of the best stories from our previous bands and worldly travels.

Podcast co-host “hour of the barbarian”

Started my own home studio in 2013 called Veracuda Studios and will be Recording the new record there.

Did a radio show with Chris Elder called Hour of the Goat at KXLU radio station.

Wrote for Stance skateboard magazine for a spell.

Previous bands:  Spazz / Despise You / Lack Of Interest / East West Blast Test / Stikky / No Use For A Name

I wrote for Maximum RockNRoll from the mid 80s to early 90s.  I was the “thrash guy” at the magazine, writing record reviews for all of the more “extreme” releases, and this was a huge factor in how I connected early-on with the up & coming grindcore, doom, and power violence scenes ( for instance, I reviewed the EyeHateGod demo tape for MRR way back in 1989 or whenever it was… I reviewed all of the first Relapse releases, too).

Wrote for Flipside and other publications through the mid 90s.

Worked for Alternative Tentacles and Fat Wreck Chords through the 90s.

I ran a one-man record label Slap A Ham from 1989-2002 that became best known for helping to launch the West Coast Power Violence scene.

I traded my record collecting obsession for a beer obsession thanks to Dave Witte.

Witte was responsible for providing me with the “gateway” beer, the one that got me hooked.  It was when I met up with him during a 2001 tour when he was drumming with Melt-Banana.  He brought down a growler from Hair Of The Dog in Portland.  That was the one brought me to my senses & proved that good beer actually exists.

In 2013 I created a competition called The Big Year In Beer, and made a serious run for it in 2014.  The Big Year, based on the birding competition of the same name, is a challenge to see how many different beers could be sampled over the course of a calendar year.  I had two serious challengers, and one of them gave me a surprisingly close run for my money at 2,600 beers, but I won with a year-long total of 3,214 different beers.  I applied to the Guinness Book Of World Records, but they denied my application saying it could not be substantiated, even though I kept a running total throughout 2014 on my blog of the same name.  As far as I’m concerned, I hold the unofficial World Record for Highest Number of Different Beers Sampled over the course of a year.  Having jeopardized my health & wallet by consuming that many, and having dedicated that much time & effort to document it, I’m convinced no one is crazy enough to have surpassed me anywhere in the world.  I’m slowly working on a book about the experience.

I’ve brewed a handful of beers with Lee Bakofsky from Eagle Rock Brewery.  The first beer was a collaboration between me, Ryan Harkins, and Lee Bakofsky – an oatmeal stout called None More Black.

And I’m looking to brew more!