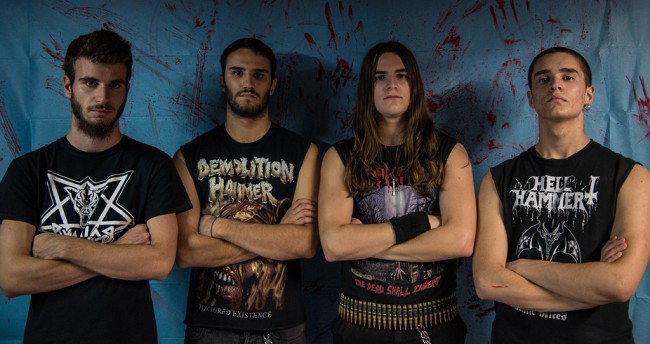 The Greek thrashers have just released their debut
Rapture was formed in the last days of December 2012. In January 2013, the first lineup was completed, with Apostolos on Lead Guitar and Vocals, Matt on Lead and Rhythm Guitar, Theo on Bass and Thodoris on drums.
Soon after the first live performance, Thodoris was fired. Meanwhile, the band recorded their part on the Hellenic tribute to Death “Only Death Is Certain”, covering the song “Crystal Mountain”. The band faced trouble finding a new drummer so the position was temporarily covered by Aggelos, friend of Matt and drummer of the band “Burn The Sun”.
The recordings of the debut EP started in April and it was released in summer of 2013. Soon after the release, Theo and Matt left the band, and their positions were covered by Stamatis on bass and Manolis (Ex- Acid-Fury) on lead/rhythm guitars. The new drummer was George T. The band released another promo-ep in 2014, showing its new musical directions (Death/Thrash).

A whole new chapter started for Rapture in Fall 2014 when George T. and Manolis G. left the band and their positions were covered by Nikitas M. (Guitars) and George M. (Drums). Currently Rapture are stronger than ever, as the release of their first album “Crimes Against Humanity, will take place on October 30 2015, by Witches Brew. The band has already played gigs with some of the best bands of the greek underground (Death Courier, Overkast, Mentally Defiled, Dark Nightmare and many more) and currently they are busy organizing live shows all over Greece, and maybe even Europe.