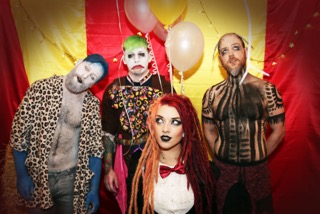 The best of grunge with a modern twist

Hands Off Gretel, a delightful blend of all the best alternative grunge rock music to come out of the 90’s, with a hint of modern day post punk.

Hands Off Gretel was formed from the foundations of an early musical partnership between singer/songwriter Lauren Tate and guitarist Sean McAvinue.

Following a tumble down the stairs at rehearsal, Sean broke his hand and frustrated by having to wait till he got fixed, Lauren picked up the electric guitar for the first time and started to play.

She wrote a bunch of new songs describing them as ‘frustration songs’ with a new rawness, expressive energy and honesty. Inspired by strong women like Brody Dalle and Courtney Love Lauren felt the world needed more angsty honest females in a sea of commercialised pop, singing about break ups and being famous; she gave the world Hands Off Gretel!

The band launched in Feb 2015 with the release of their first DIY video ‘ Be Mine’ and a 3 track EP for free download. In less than 3 months Hands Off Gretel was invited to play Camden Rocks Festival, after being selected from over 3,000 band entries and were also invited to play Devolution Magazines 10th year Anniversary event.

Word began to spread quickly around the London venues, which saw them returning to the Capital from their Northern town many times over the last year, including their latest gig with Skating Polly from the US which saw the Lock Tavern in Camden at capacity and admiration from Kate Nash who claimed Hands Off Gretel “Are my new favourite Everything!” after watching them play.

The band have also built up a strong international fan base and US Alternative Press picked them out as “A band you need to know about” in their Feb 16 Edition, featuring their single release ‘ My Size’ , which also received airplay on TeamRock Radio and BBC Introducing.

2016 also saw a few line up changes for the band with Sam Hobbins joining on drums and Joe Scotcher on bass, forming a tight rhythm section that has given the band even more energy.

The bands latest single release on 8th July ‘ One Eyed Girl’ is from the bands debut album, due for release late August. The video directed and produced by Lauren is testament to the strong DIY ethic that underpins this band, reminiscent of the Riot Grrrl bands of the 90’ s , with hand designed merchandise and colourful zines celebrating female empowerment.

Lauren Tate : “I channelled a lot of my anger when I wrote One Eyed Girl. The subject is a really personal one to me, inspired by a mis-understood girl I used to know at high school. She was the kind of girl everyone laughed at and called a slut, the kind with problems and nobody to take her seriously, the kind of girl boys used because she had no self worth, the easily exploited one. The song meaning itself is pretty dark, but I wanted to keep it playful in complete contrast to the subject matter. The song to me has a real carnival old circus style feel and instantly I was inspired to theme the track around a freak-show, which also made visual sense, with the song being about exploitation and being treated like a freak in society. “