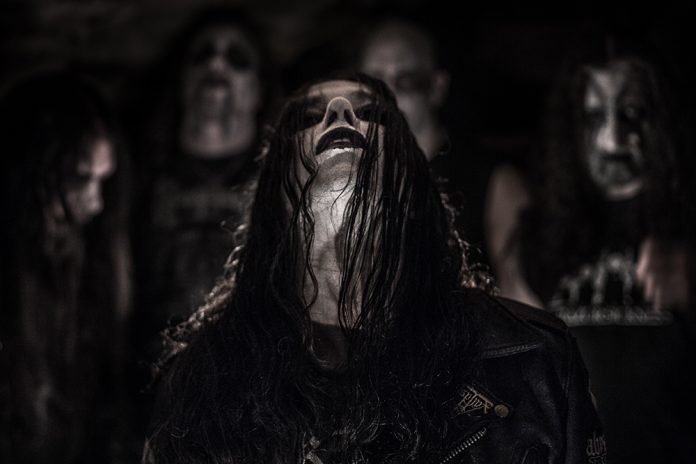 MERRIMACK were founded by guitarist Perversifier in 1994 with a clear vision to keep the black metal flame burning as an act of aesthetic terrorism – as adamantly based in the underground as opposed to any attempts to co-opt, commercialise, or turn the style into a self-parody.

Although MERRIMACK decided to reach a larger audience with the release of their first full-length ‘Ashes of Purification’ (2002), the Parisians remained dedicated to their roots firmly lodged in dirty, grime, and fanatical passion. Their jet-black debut and the ‘Hellgium Raped’ EP (2003) attracted wide attention and the following releases were backed by professional labels.

‘Of Entropy and Life Denial’ (2006) and ‘Grey Rigorism’ (2009) witnessedMERRIMACK closing the ranks with the most influential, active, and authentic acts of the French black metal scene. Their classic combination of harsh sound with epic structures appealed to critics and fans alike and put the band on their celebrated first US-tour with MARDUK and NACHTMYSTIUM in 2009.

Following the recording of ‘The Acausal Mass’ (2012) again in the legendary Necromorbus Studio (WATAIN, DESTRÖYER 666), MERRIMACK embarked on a European tour with Norwegian genre icons MAYHEM and accepted invitations to prestigious festivals such as Hellfest in their native France, Germany’s Party-San Open Air and Summer Breeze and Montreal’s Messe des Morts in Canada.

Having firmly established their black name and message around the globe,MERRIMACK are currently preparing to release their next milestone of brilliant black metal, balancing malicious underground spirit, and wickedly simmered maturity this year.

More dates for this tour to be announced soon.