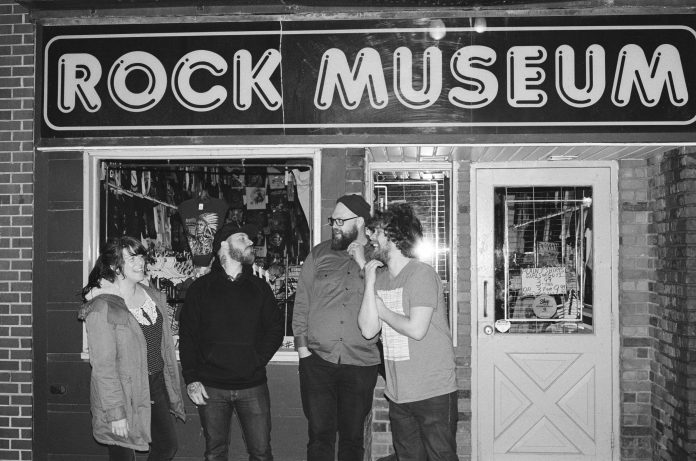 Julie & The Wrong Guys, a new project from Julie Doiron of the ’90s Sub Pop band Eric’s Trip, Eamon McGrath and members of Toronto’s Cancer Bats, are announcing their self-titled debut album today. ‘Julie & The Wrong Guys’ is due out September 8 through Dine Alone Records, and the band are trailing the announcement with new single ‘You Wanted What I Wanted’.

Accompanied by an animated video directed by Alek Rzeszowski, the track is typical of the band’s high energy approach on the record, juxtaposing what Doiron’s sometime collaborator Mount Eerie once called “the world’s greatest and saddest voice” with the band’s bruising, alt-inspired tendencies.

Speaking about the new track, bassist Jaye Schwarzer tells Stereogum: “This was the track where we realised that we could be a powerful band. We all had a hand in coming up with the lyrics to this song together. It was a unified vision we had of people who have come in and out of our lives who had grown jealous or had tried to put restraints on us. It comes from years of frustration and signifies the all too familiar trip of starting out on the journey again.”

Julie & The Wrong Guys is the new incarnation from New Brunswick native and Polaris Prize-nominee Doiron, who joined the Sub Pop-signed Eric’s Trip as an 18 year old. Since the cult outfit’s disbanding back in 1996, Julie’s solo career has taken in over 10 studio releases (issued variously by the likes of Jagjaguwar and Sub Pop, and sung in both Doiron’s native English & French), collaborative projects with Mount Eerie and Okkervill River, and the Juno-winning album ‘Julie And The Wooden Stars’.

‘Julie & The Wrong Guys’ finds Doiron bringing her story full circle in some senses, returning to her garage rock foundations, bolstered here by the driving rhythm section of Cancer Bats, alongside the fuzzed-out guitar sounds of McGrath. The four somewhat unlikely collaborators originally came together back in 2011, when Julie recruited Peters, Schwarzer and McGrath to step in as her live band across a run of Canadian tour dates. Sensing something more permanent in the live & songwriting rapport they fast established, they re-paired in the autumn of 2016 to the backwoods of Red Rock Lake, Manitoba to translate their live alchemy into a record.

Whilst Doiron has cemented her position as Godmother of Canadian indie rock down the years with her subtly nuanced songwriting, across ‘Julie & The Wrong Guys’ her delicate, emotionally evocative vocals have evolved into a perfect foil to the heavy blows of her bandmates’ sound. On piss-and-vinegar lead single ‘You Wanted What I Wanted’ she carves out moments of genuine vulnerability between a chorus barbed enough to bring her voice not far from cracking – “I was channeling my inner Kim Gordon!” Julie recalls.  The band are announcing a series of North American dates in support of the album (including a run with Toronto’s Casper Skulls), with UK & European tour dates soon to be confirmed.