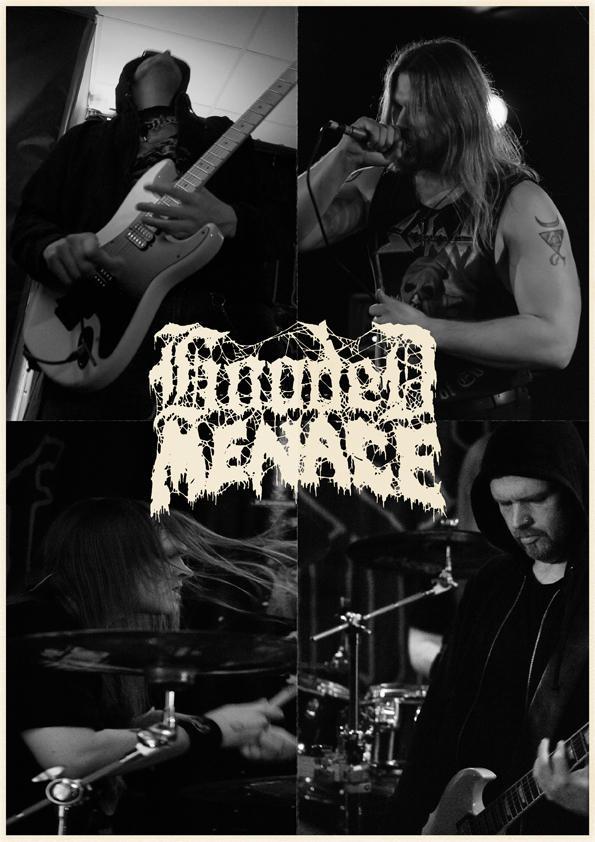 HOODED MENACE are a death doom metal band that was formed in Joensuu, Finland in 2007 by guitarist Lasse Pyykkö, who had also performed in the Finnish cult death metal band PHLEGETHON. HOODED MENACE have always been open about being strongly influenced by early CANDLEMASS and CATHEDRAL as well as PARADISE LOST, AUTOPSY, ASPHYX, and WINTER. The Finns successfully aimed at playing very doom-laden death metal that combined crushing and somber riffs with an essential hint of melodies. Their lyrics are often inspired by the classic 1970’s Spanish horror movie series ‘The Blind Dead’ that included such films as ‘Tombs of the Blind Dead’, ‘Return of the Evil Dead’, ‘Horror of the Zombies’, and ‘Night of the Seagulls’.

HOODED MENACE proceeded to recorded a 2-track demo titled ‘The Eyeless Horde’ in 2007, which was released on 7″ the following year. The Finns unleashed their debut album ‘Fulfill the Curse’ in 2008 and the highly acclaimed sophomore full-length ‘Never Cross the Dead’ delighted fans and critics alike after its release in 2010. HOODED MENACE remained in a highly creative mode and increased their following with the next two milestones ‘Effigies of Evil’ (2012) and their latest album ‘Darkness Drips Forth’ (2015). last year. True to classic vinyl style, HOODED MENACE also released several split singles and EPs for example with ASPHYX and COFFINS.

As an active live band, HOODED MENACE performed at many prestigious major metal festivals such as Hellfest, Roadburn, Maryland Deathfest, Tuska, and Party San Open Air among many more. The Finns toured Europe as a headliner in 2015 and are about to embark on a North American road-trip with DEMILICH and VASTUM, which includes an appearance at California Deathfest.