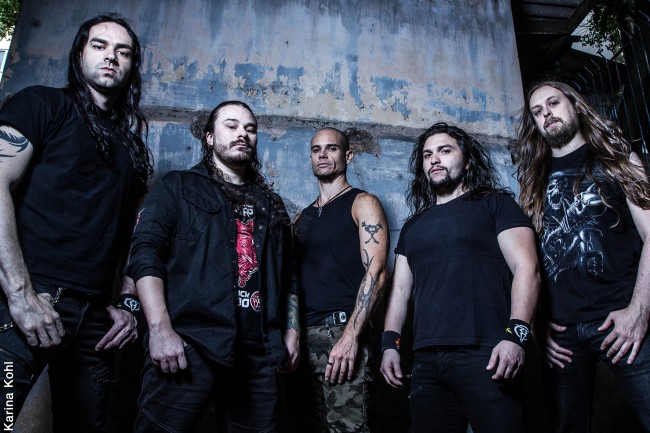 Their new album is out in August, here’s the skinny on the band

HIBRIA is a Brazilian power metal band formed in Porto Alegre, Rio Grande do Sul in 1996.

The band has grown in popularity in their home country plus worldwide with the successful release of fours albums and a live DVD that showcases their intense concert energy (if ya never seen them in person). Continuing their venture in 2015 with their very technical playing that’s fast, aggressive and catchy, HIBRIA returns with their fifth and latest self titled studio album set for release on August 7th via Test Your Metal Record in North America (July 22nd in Japan on King Music) to follow 2013’s ‘Silent Revenge’ released under King Records for Asia, AFM for Europe and North America plus Voice Music for Brazil.

“We self titled this release because we believe that it represents what our music is and how we feel about our band. This is our second CD composed with the same lineup and it made all the difference in our songwriting. We already knew what to expect from each other and it contributed a lot for us to write this new work.” says “It is our most daring album. We experienced new influences and they made this album to sound so fresh. We really feel we have started heading to a new level as a band.”

All four of their past albums and live DVD released have reached the #1 position on sales charts for HMV stores across Japan and has lead the band to be support for such bands as Metallica, Black Sabbath, Ozzy Osbourne, Megadeth plus perform at Rock in Rio and Loud Park, Japan’s most important Metal festival, where they shared the main stage with some of the world’s most known bands.