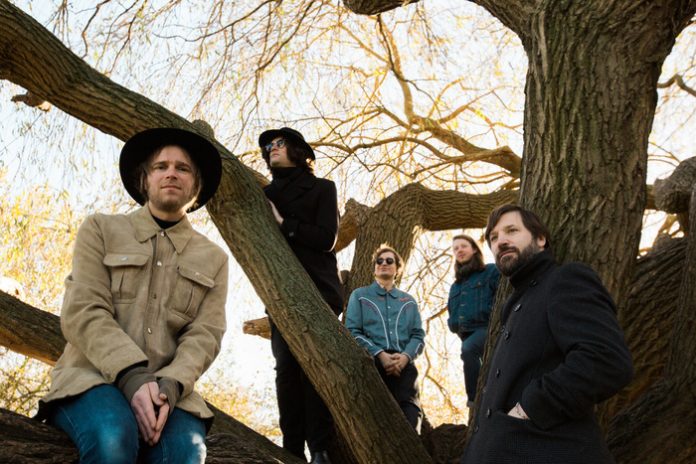 The Hanging Stars are comprised of songwriter, singer and guitarist Richard Olson (The See See, Eighteenth Day of May), Sam Ferman on bass, Paulie Cobra on drums, Patrick Ralla (The Alan Tyler Show) on banjo, guitar, keyboards and assorted instruments, with pedal steel courtesy of Joe Harvey White.
Their debut album Over The Silvery Lake was released in 2016, receiving plaudits from The Times, who described it as; “An album with enough of a hazy, sun-dappled charm to make the capital’s dreariest weather bearable”, as well as Uncut, who proclaimed that it was; “a promising debut from London’s The Hanging Stars, who switch deftly between deliciously sentimental Americana and swaggering psychedelia”. They picked up a good amount of support at Radio 2 and 6 Music, with lead single “The House on the Hill” scoring a much-coveted 10/10 by John Robb on Steve Lamacq’s Roundtable.
The new album is more varied than its predecessor and sees them expanding into new territories whilst continuing to channel an English wistful ethereality grown from American soil.  Recording was again conducted at the legendary Bark Studios in Walthamstow with Brian O’Shaughnessey (The Clientele, Primal Scream, My Bloody Valentine) at the helm. They had a collective attitude to performances on the album, with additional input from US friends Collin Hegna(Federale, Brian Jonestown Massacre), Miranda Lee Richards (on the emotive duet “How I Got This Way”), and Christof Certik (Brian Jonestown Massacre, Winter Flowers), as well as Alison Cotton on viola (Left Outsides, Eighteenth Day Of May), Luke Barlow (Nought) on flute and Thomas Wake on clarinet.
With this album, The Hanging Stars usher the next phase of their musical development, with Olson’s astute lyrical observations and honeyed vocals at the fore, backed by the band’s creative musical arrangements. These aren’t just songs for somewhere else, they are songs for right here and right now. The perfect timeless antidote to these troubling times.
http://thehangingstars.com/
https://www.facebook.com/thehangingstars/
https://twitter.com/thehangingstars