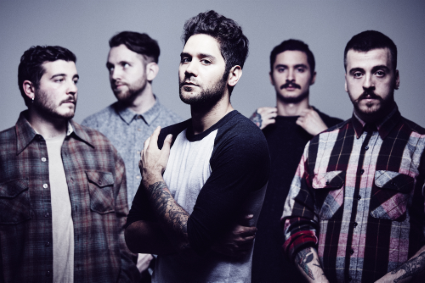 Good Tiger was formed in 2015 by guitarists Derya “Dez” Nagle and Joaquin “Jo” Ardiles. Dez enlisted some of the pair’s most talented friends to complete the lineup: vocalist Elliot Coleman, drummer Alex Rüdinger, and bassist Morgan Sinclair. The group was intent on recording this album on their own, and announced the band to the world through a crowdfunding campaign. For a brand new band, this was a fairly risky move, but in less than 24 hours, they had raised over $18,000. By the end of their campaign this figure rose to a staggering $45,980. That sum served as a resounding endorsement from fans that, yes, they were just as excited for this new project as the band themselves.

Each of these musicians have a history of performing within the rock and metal genre, with notable acts including: Tesseract (Coleman),Architects UK (Sinclair), The Safety Fire (Nagle and Ardiles), The Faceless, Conquering Dystopia, and more (Rüdinger). What these credits really highlight is that this band has the collective experience in both songwriting and live performance departments years beyond that of any typical “new” band. In fact, Dez specifically notes that “this project, more than anything else, is focused on the live element, and making sure those aspects really come across on both our recordings and on stage. These songs were written to be enjoyed live.”

With members in various locations throughout the globe, A Head Full of Moonlight was pieced together internationally by a selection of exceptionally talented individuals. Guitars and bass were recorded at Dez’s own studio, Playgle Productions. Vocals were tracked both in Los Angeles with Brandon Paddock (Avril Lavigne, Black Veil Brides, Daughtry) and Washington DC (with Dez). Drums were captured in the British countryside at Middle Farm Studios with Adam ‘Nolly’ Getgood ofPeriphery fame. Finally, the record was co-mixed by Dez and Nolly, with mastering by Kris Crummett at Interlace Audio.

The result is dynamic, exciting, heavy rock music, for the lack of a better term, played by accomplished musicians. Each member’s prowess is clearly on display while playing for the sake of the song rather than boastful musical technicality. Drummer Alex Rüdinger adds,“I’ve known everybody in this band for a pretty long time, now. I was very excited just about the idea of working with these guys, as people. It’s a good mixture of having a good time and taking care of business, and these guys are perfect for that. This is the exact kind of band I’ve wanted to do.” Musically and lyrically, this band is a collaborative effort on all fronts. Dez and Elliot co-wrote vocal melodies, and lyrics were penned primarily by Dez, Elliot, and Joaquin.

Vocalist Elliot Coleman explained the band’s origins: “Dez contacted me and asked if I would be interested in working with him on a new project. I hadn’t been in a band for a while, and I was extremely interested from the get go. I’ve always been a big fan of his work. From the very first song he showed me, I wanted to be part of it in any capacity possible, whether it was just something we put online, or something bigger than that. I’m thankful it’s become bigger than that, already.”

The debut single, “Where are the Birds”, has been heard on BBC Radio 1, featured on iTunes/Apple Music, and the music video (directed by Kim Taylor, produced by Compulsory) has been seen on Kerrang TV, Scuzz TV, MTV Rocks and more throughout Europe. An exclamation point on the band’s successful introduction to the world happened in early 2016, with the announcement of their first North American tour with Between the Buried and Me, and their signing with Blacklight Media, the brand new imprint from Metal Blade Records. Blacklight Media was founded by celebrity chef Chris Santos in collaboration with Metal Blade Records CEO Brian Slagel. It goes without saying, but the future of this band stands to be an exceptionally bright one.