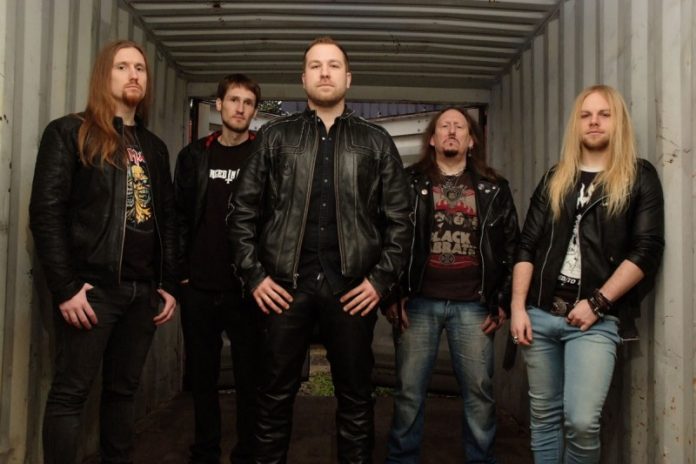 Forged In Black came into being in 2013, when the members of Merciless Fail decided a stronger, more metallic name was needed to accompany a new, more focussed and driven attitude to their music. Their aim was to bring together the virtuosity and guitar melodies of traditional metal, the power and energy of thrash metal, the atmosphere of the darkest doom and the epic scope of power metal. Everything they loved in music alchemically blended into one potent potion of metal magic!
Having released their self-titled debut album – an expanded version of a Merciless Fail EP with additional material and new cover art – Forged In Black quickly powered ahead, barely pausing for breath, before unleashing a new four track EP entitled The Tide. This highlighted their formidable new found sense of purpose and lead to them recording a single, ‘The Exodus’, with producer Romesh Dodangoda, noted for his work with Motörhead, Sylosis and Bullet For My Valentine.

Now, in 2016, Forged In Black are preparing to unveil their finest release to date, their music honed to perfection through years sharing the stage with the likes of Breed 77, Savage Messiah, Praying Mantis and Beholder. The Fear Reflecting Fear EP was recorded with the legendary producer Chris Tsangarides, a man who helped to craft some of the finest albums recorded by bands such as Thin Lizzy, Judas Priest, Black Sabbath and King Diamond.
Soaring vocals, thundering rhythms, scything riffs and swirling, cascading solos; with Fear Reflecting Fear, Forged In Black are poised to make their mark in the annals of metal history, following in the footsteps of those great names mentioned above.