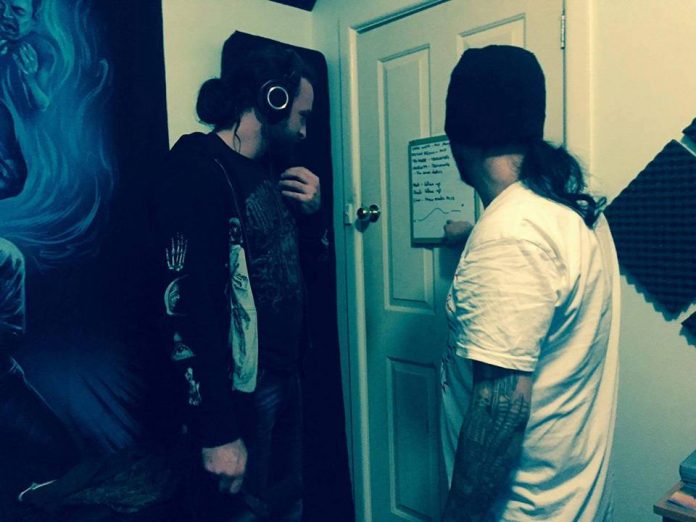 Check out the Aussie metallers who are planning a new record
Eye of the Enemy (Australia) are currently working on new music! The group has been sharing pictures from the studio on their social media accounts. This marks the band’s first follow-up album, since the departure of long-time front man and vocalist, Julian Detar, in November of 2014. Vocalist and Comedian, Mitch Alexander, was unveiled as the new vocalist on January 23, 2015. Although EOTE have been working hard on their new album, the band has remained active; performing recent shows with Be’lakor, Hybrid Nightmares,Hadal Maw, and a sold-out concert with Fear Factory in Melbourne.
The band was also recently added to a ‘Melodic Death Metal’ playlist on Spotify, created byNuclear Blast Records,
https://play.spotify.com/…/…/playlist/54hpDQoAQFmd6CZ70JVzDd
Eye of the Enemy have been dominating the Australian metal scene with their powerful blend of melodic death metal since 2006, with the release of their Demo and subsequent self-titled E.P in 2008. Shortly after the release of the ‘Eye of the Enemy’ EP in 2008, the band signed with Australian label Just Say Rock Records and Welkin Entertainment Booking Agency. Performing show after show, with unrelenting aggression and unrivalled energy, the band quickly rose to become one of the strongest metal acts the Australian metal scene had to offer.
In 2010, Eye of the Enemy released their first full length album ‘Weight of Redemption’. The album was received with much fanfare and critical acclaim, being nominated for album of the year against metal heavyweights across the globe. With standout tracks such as “A Reason for Treason”, “Facade”, “Peace”, and “Burn the World”, the album spoke to metal fans and non-metal fans alike. In support of their powerful release, Eye of the Enemy played several notable shows and national tours with bands such as Amon Amarth, At The Gates, Children Of Bodom, Cradle of Filth, Despised Icon, and Malevolent Creation. The band also made an appearance at Screamfest Metal Festival alongside Edguy, Ensiferum, Cynic, Dark Funeral,Destroyer 666 and more; as well as performing the Sonic Forge Festival 3 years in a row alongside some of the biggest names in Australian metal from past and present.
In early 2014, Eye of the Enemy marked their return with their long awaited sophomore album, ‘The Vengeance Paradox’. The Vengeance Paradox received widespread critical acclaim and was included in 2014 album of the year lists by a number of media outlets including Triple M’s Distortion, HEAVY Music Magazine, Metal Obsession and Trendkill Magazine. In addition to this, on the back of the album’s release, the band won the Global Metal Apocalypse award for Breakthrough Australasian Metal Band of 2014. Upon release of ‘The Vengeance Paradox’, Eye of the Enemy toured the east coast of Australia with the legendary, Children of Bodom. Playing to packed venues and enthusiastic crowds, the band left a long lasting impression, proving that their live show matches the ferocity of their music.
In 2014, Eye of the Enemy signed to Swimming With Sharks Records, headed up by Noah “Shark” Robertson (Motograter, Ex-The Browning) and shortly after embarked on a successful tour of Asia. Touring across eight cities, Eye of the Enemy served as direct support for FLESHGOD APOCALYPSE in Hong Kong, Taipei, Osaka, Tokyo and performed a series of headlining shows in Busan, Seoul, Guangzhou, and Wuhan. In Osaka and Tokyo, Eye of the Enemy were joined onstage by Tasmanian tech-death band, Psycroptic and in Hong Kong, Osaka, and Tokyo, Eye of the Enemy were joined onstage by Melbourne prog-metallers, Ne Obliviscaris.
Eye of the Enemy continues to create powerful, timeless music which blends devastatingly heavy and melodic riffs seamlessly, showcasing the strengths that make Eye of the Enemy one of the most exciting metal acts today.
Links:
http://www.swsrecords.com
http://www.facebook.com/eyeoftheenemyband
YouTube –https://www.youtube.com/channel/UC4oeyaw2ZyAxwyEKJPNjURw
Twitter – https://twitter.com/eyeoftheenemy
Instagram – http://instagram.com/eye.of.the.enemy