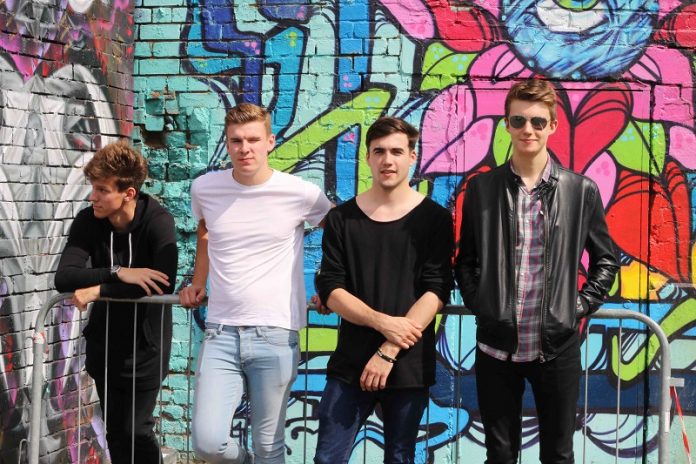 Warwickshire band with big plans – and a single out

Maturity comes to us all at varying times; whether in life, skills, or within our artistic sides. In regard to the latter and British quartet The Ellipsis, it has certainly come at a young age; for band and a sound which fires up ears and spirit alike.

The seeds of the Coventry band were sown from the first project formed by guitarist John Connearn and drummer Ben Eardley when they were just 12. From there and with bassist Harry Green and vocalist/rhythm guitarist Henry Bristow settled alongside the founding pair, creative sparks and bold imagination nurtured attention chasing songs, through which The Ellipsis caught the eye of a former Universal Music Executive who has continued to guide them since.

Since those early days, and especially across the past two years or so, the foursome has made an increasing impact not only on their region but equally upon broader awareness. The band’s first single, ‘White Feather’, stirred up local support and radio play; its success aiding the band in drawing potent crowds for their shows around the Midlands. Their live presence has continued to rise hand in hand with their growing reputation; playing the Wychwood Festival, headlining Coventry OxJam, and performing in front of 30,000 rugby fans at the Ricoh Arena amongst many highlights to date.

As their festival appearances stacked up so did reactions and support for the band’s singles; their inventive and tenacious fusion of indie and alternative rock, fuelling songs which are as catchy as they are melodically dramatic and as imaginatively bold as they are lyrically and emotionally insightful. Never creatively standing still, The Ellipsis persistently pushes and finds evolution in their sound and craft, resulting in tracks like latest single ‘Wasted Potential Me’; a virulent slice of infectious rock ‘n’ roll. Backed by an equally dynamic video which has already won two national awards at a presentation at The British Film Institute, the track alone has drawn a fresh wave of ears and appetites their way.

With increasing play on local BBC stations, as well as BBC Radio 1, being recognised by The Coventry Music Museum and opening The Godiva Music Festival this July, 2016 is gearing up to be the most successful and potent year for The Ellipsis yet; one which will be backed by new songs and invention which the band are very excited about unveiling.