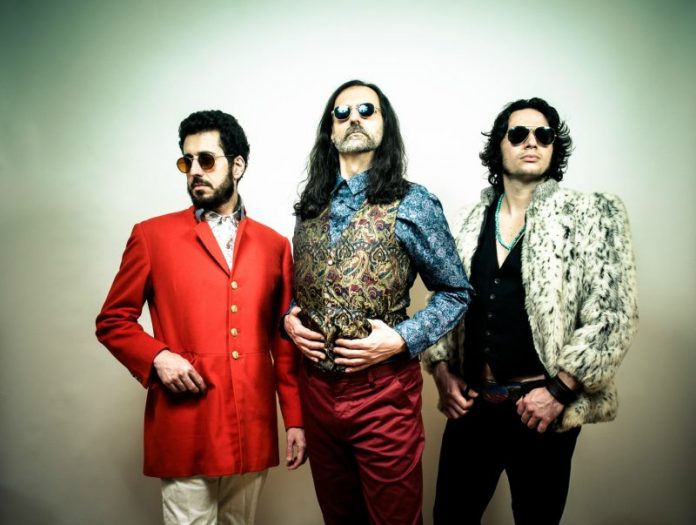 Superb Canadian’s gearing up for a big year

A Devil’s Din is made up of 3 musicians born in the Old World who traveled across the ocean to find each other in Montreal, drawn together by a mutual love of melodic, innovative, inventive and daring rock music. Fusing the colourful sounds of Syd Barrett’s Pink Floyd & the psychedelic-era Beatles with intensity of classic power bands like Sabbath, The Who, and Led Zeppelin, as well as the boundary-pushing adventure of Yes, Gentle Giant and King Crimson, A Devil’s Din is an uncommon and uncompromising voice in modern music.

In 2008, UK-born stalwart Montreal-based multi-instrumentalist and session musician David Lines decided he needed to form a musical outfit that would suit his own particular psychedelically-induced musical visions, and thus A Devil’s Din was born. While still working as a musical “gun-for-hire” around town, he continued to develop the songs and sound for A Devil’s Din–which he considers an Art Project not to be tainted by commercial desires–recording their first album One Day All This Will Be Yours between 2009 and 2010, and releasing it on his own label Island Dive Records in 2011.

Though the musicians on that record were excellent, it wasn’t until Lyonnais bassist and disciple of the Holy Trinity of Rickenbacker Bass (John Entwistle, Chris Squire and Geddy Lee) Thomas Chollet entered the picture, along with drummer Dom Salameh (whose being born in Abu Dhabi did not at all prevent him from becoming an ardent Keith Moon devotee) that the sound really began to take shape. The synergy of the three took the music to another level, as witnessed at their intense and energetic live shows and has been made manifest on the new A Devil’s Din album SKYLIGHT that is set for release on June 17th, 2016.

A Devil’s Din continues to travel further afield in the world of psychedelic and progressive rock music, transforming listeners’ minds where ever they go.

Their first European tour will take place in September and their albums are available through various retailers on line and through their website www.ADevilsDin.com.