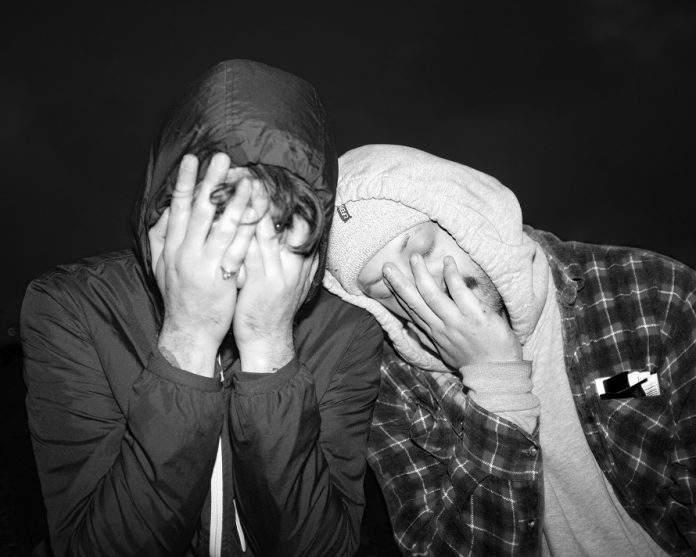 Raised in the claustrophobic backwaters of Hereford, young two-piece consuumer play a raucous set. Inspired by the sheer volume of Melvins, the raw power of the Stooges and the bleak doom of Sabbath, consuumer create a brutal, nihilistic sound, steeped in a raw energy and honesty that could shake even the most apathetic listener. With a huge string of UK live dates under their belt including a Birthday’s headline show and an acclaimed first single, the band are now ready to release their debut EP ‘Shattered Fruit’.

consuumer’s forthcoming EP exhibits their unique brand of disparate and desperate noise rock, which could be equated to the sound of early-Nirvana meets Big Business meets USA Nails. Tracks such as ‘radio’ showcase their detached and frenetic guitar work which seamlessly transforms into crushing riffs that drive the controlled yet wild drum work. The entire EP is flooded with acerbic vocals, which serve up acidulous would-be adages and moments that can’t be explained as anything other than explosions of pent up rage and emotion. At other times, you can hear a much heavier set of influences such as at the end of title track ‘Shattered Fruit’ where fuzz-drenched guitars descend into  doom-inspired riffs, or in ‘axe’ where the vocals become more caustic and lean more toward the sound of Eyehategod or Unsane than that of earlier comparisons.

‘Shattered Fruit’ is a masterfully vexatious collection of songs, which combines the angst and fuzz of mid-90’s grunge aligned against abreactive passages of noise. Speaking about the concept behind the EP, the band say, “I think that as a whole the EP works within themes of being young, confused and uncomfortable, both of us work jobs we hate to fund doing the thing we love and I think that the frustration of not being where we want to be and not necessarily being comfortable in our own skin made the record quite cathartic for us.”

Overall ‘Shattered Fruit’ conveys the sound of a two friends that are driven to boiling point by a continuing nihilism and generational self-loathing, and by reaching this point consuumer have produced a debut which is accomplished as it is expressive. As far as introductions go ‘Shattered Fruit’ is a burst of sardonic fury that is over before you know it, but luckily this is only the start of their journey into powerful self-expression.