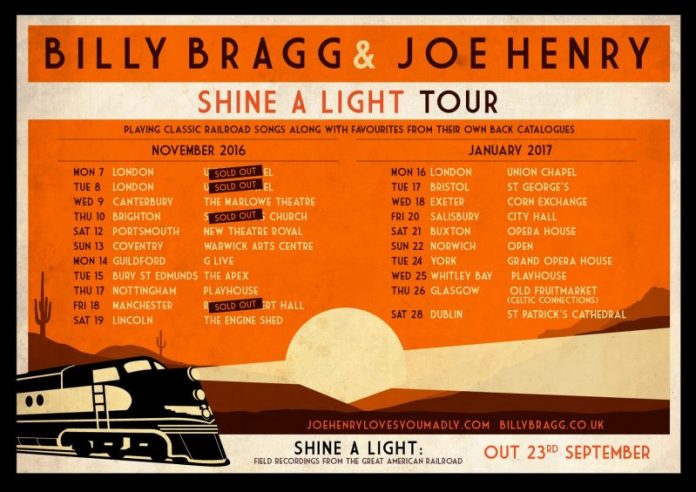 The great American railroad stops off in Coventry

It is not, lets be honest, a good week to be a progressive American.

Not, you understand, the type of progressive that likes Yes, but the type that thinks his county shouldn’t have said yes to Trump. Which is why Joe Henry uses part of his solo to tonight to say sorry, but also to say something that rather sums tonight up: “What happened on Tuesday might be where we are right now,” he offers. “But it’s not who we are…..”

We already know that of course, but still he deserves a round of of applause for saying it.

It is somewhat ironic that in these times of Brexit and a general shift to the right politically, that Billy and Joe Henry, two kindred spirits with a socialism of the heart (as one of them once sung) are touring an album of roots music. “Shine A Light” is a journey – literally – through America’s heartland on a train, stopping off to record tunes on the way. The results are stunning, and they are here too.

The mournful and desolate “The L&M Don’t Stop Here Anymore” is quite brilliant, as is the cover of the old Leadbelly (described as the patron saint of the album) classic “In The Pines” (sung by Nirvana and others as “Where Did You Sleep Last Night?).  The use of the imagery of the train as a call for freedom comes through in the version of Jimmie Rogers’ “Waiting For A Train”, but this lengthy night is really only just getting started.

Both men get their own solo spots. Henry first, with his brand of downbeat classic songwriting. Best known, perhaps, as a Producer for the likes of Elvis Costello and Bragg himself, he proves to be a fine artist in his own right. The gorgeous “Trampoline” and the wonderfully acerbic “Our Song” – played at the piano here – are topped, just, by “Freedom For The Stallion” sung in tribute to his late friend Allen Toussaint.

Bragg is next up and his half an hour is mostly – as you’d except given the state of the world – from his political songbook. “Between The Wars” remains a personal favourite of MV, “Help Save The Youth Of America” takes on greater significance than usual, as does “There Is Power In A Union” with which he closes.

As good as they are individually, however, tonight is about the collective. The pair bouncing off each other, but more importantly, celebrating these great songs. “Railroading On The Great Divide” is highly charged here, “Rock Island Line” is returned to its original call and response arrangement and is arguably the highlight of the night, and the if the ghost of Woody Guthrie (with whom of course Bragg started the journey into US folk with those incredible “Mermaid Avenue” records) is never far away.then that’s especially true when his favourite song “Hobo’s Lullaby” is played, and there is another dip into Leadbelly for “Midnight Special” to end the set.

The encore includes “Gentle On My Mind” which is one of the first songs Henry ever bought and is lovingly sung here, and ends with “Ramblin’ Round” Woody Guthrie’s song about being an economic migrant looking for work in the 1930’s. Proof positive that the more things change the more they stay the same, perhaps, but also that while these songs live on there is still hope of a better world. Tonight breathed new life into them and was a real triumph, one that evidently was enjoyed by those onstage as much as those in the audience in a way that was – considering the last six months – almost cathartic.