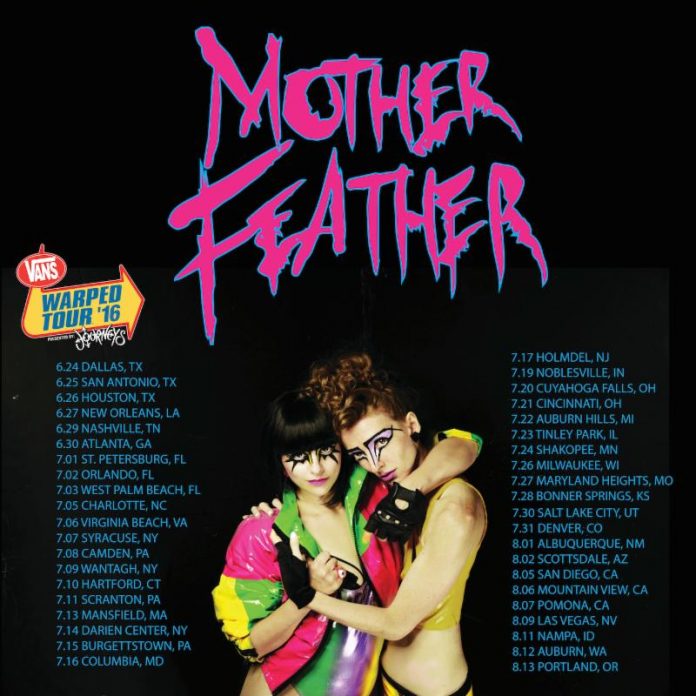 Spot on the Warped tour for New Yorkers

New York City’s self-described “pop cock rock” band Mother Feather has announced today that they will appear on Warped Tour all summer, in support of their eponymous debut album due out May 13th worldwide via Metal Blade Records. Joining them on the annual trek will be Atreyu, Bullet For My Valentine, Every Time I Die, Motionless In White, and many more, making this another landmark Warped Tour, not to be missed! See below for dates; for more information, please visit: http://vanswarpedtour.com

Last week, Mother Feather pulled back the curtain and bared their collective soul as they cut four songs live – no edits, no click tracks – at the BBC’s legendary Maida Vale Studio 4 in London for Daniel P. Carter’s Rock Show on BBC Radio 1. The set includes the mission statement “Mother Feather,” current single “Living, Breathing,” fan favorite “Trampoline” and perhaps a glimpse into their next album with a daring version of a brand new song, “I.C.U.” To listen to the session, please visit: http://www.bbc.co.uk/programmes/b074164h

“Living, Breathing”, “Mother Feather” and “Trampoline” are taken from Mother Feather‘s upcoming self-titled album. Featuring ten tracks that marry the scratchy yet catchy, swaggering, and dangerous sounds of The Stooges, Blondie, and the Yeah Yeah Yeahs with the playfulness, pop sensibility, and exuberance of the finest 90s alt-rock, Mother Feather is the combination of the band’s two independently released recordings – 2011’s Mother Feather EP and 2013’s Living Breathing EP – plus two new songs, “Natural Disaster” and “The Power.” The eight tracks found on the previously released EPs have been given new life on the upcoming full-length – including a new music video for the lead off track “Living, Breathing,” filmed by director Marc McAndrews at NYC’s Bowery Electric. To watch “Living, Breathing” and pre-order the album in all formats, please visit: metalblade.com/motherfeather

The group has garnered massive buzz for their unique brand of rock, vibrant Bowie-esque costumes and makeup, and enthralling live show. Having previously been featured on IFC.com, TeamCoco.com, and HuffingtonPost.com (who declared them as “a great New York City band in the tradition of Great New York City Bands”), Mother Feather was also recently named “new band of the week” by Metal Hammer, and have received much play on Daniel P. Carter’s Rock Show on BBC Radio 1. Of the new record, lead singer Ann Courtney says, “I want to make the kind of music that makes hearts explode. The feeling when you’re fifteen and you want to hear that song on repeat turned up as loud as the stereo will go and sing at the top of your lungs and thrash around your bedroom. I don’t want to put any music into the world that isn’t going to save someone – mostly me.”

Before Warped Tour, Mother Feather will be playing a special album release show in Brooklyn, and the following night in Philly. See below for more information.