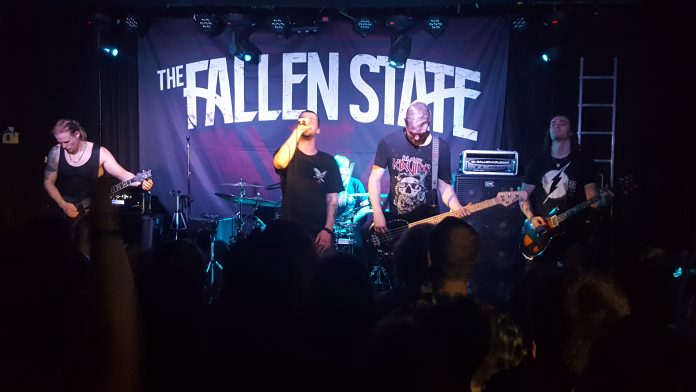 The older I get, and believe me I’m incredibly old, the more perplexing certain questions seem to become.  Let me give you some examples.

Olives.  Seriously? What’s the point? They’re the devil’s food. Throw them away.

Is rock music dead? Gene Symonds (of Kiss fame/infamy) certainly reckons it is. And yet the number of new “classic” rock bands seems to grow year on year. The last twelve months seems to have seen a purple patch (excuse the pun) of bands appearing with established fan bases and getting booked for the festival seasons.

Money?  None of us ever have enough of it. Add ££ to the above question and you have to wonder how any young, actually scrap the young, any new rock band makes any of the damn stuff.

So why do they bother?

And it’s that point which finds me standing at the O2 Academy on a Thursday night with the aim of seeing four of the best young bands around for a mere £11.  That plan is partially thwarted as Sonder are on stage at 7.15pm! A ridiculous time to start a gig.

Liberty Lies and The Fallen State have been plying their trade and gigging hard for many a year; at which point I have to put my hand up and admit to being a LL fanboy and member of The Undivided (their Facebook forum) since I (and about six others) saw them supporting Slam Cartel down the road at The Asylum.  Short of moving the gig a few miles west to The Robin2 or The Slade Rooms this is about as close to a home town gig that Liberty Lies will have and the Undivided are out in force as evidenced by the number of T shirts in the O2.

With Wolfie deciding over a year ago to pursue other career paths the hunt started for a new bassist and Miles has, after a steep learning curve, appeared to have settled into those difficult shoes. Second up in a four band bill, they’re restricted to a short 30 minute set and the band hit the stage with ‘Undivided’ before Shaun calls out those hiding at the back to come forward as this isn’t a church. ‘The Wire’ ‘Russian Dolls’ and ‘Circles’ all follow in quick succession. After a week or so on the road there is a gravelly tone to Shaun’s vocals which suit the songs. ‘Somewhere Else’ deserves a bigger stage than this; a full house in the main room next door wouldn’t be amiss at which point Shaun announces that they’ll be starting their own headline tour in June (Friday 1st at The Asylum if you’re around). I’d still like to see ‘The Difference Between Hope & Faith’ but set lists have to change and evolve and ‘Mouth Breather’ (??) fits in seamlessly.  Closing the set with ‘Are You Listening’ their rant against the music industry and after this set I’m sure that there are a few new converts in the room.

In many ways you have to feel sorry for Psycho Village, sandwiched between the local boys, who were quite frankly a damn sight better and The Fallen State, who it turns out were also far better, which is why they’re headlining. They weren’t done any favours as the sound seemed to change with the bass overpowering the guitar and Daniel giving Whispering Bob a run for his money (if you’re under 40 you’ll have to Google him) due to a long running voice problem after declining a Dutch Dr’s advice to rest. ‘It’s OK’ is well ok.  Daniel “treats” us to a solo played behind his head. I didn’t realise that guitarists still did that. Perhaps he shouldn’t.

My knowledge of The Fallen State is marginally above zero save a number of recommendations in one of the Facebook groups and following a bunch of local lads is always going to be a challenge which they rise to with some panache.

Opening with ‘Hope In Revival’ it’s clear that in Ben they have an old school frontman who engages with his fans and who is clearly very happily surprised with the reception that they receive from all these people with funny accents! ‘Lost Cause’ ‘Sinner’ and ‘Sons of Avarice’ follow in quick succession before Ben coaches the crowd in some ‘Whoa’ sing a long for ‘Burn It To The Ground’, which the fans deliver at some volume. The pace slows when Ben and Jon played a stripped down version of ‘Four Letter Word’ watched by their band mates from the side of the stage after which they head into ‘Nova’.  The song’s theme is emotive and tonight is epic in scale and surely should have closed the set as what follows is pale in comparison until ‘You Want It’ really does finish the night.  Ben described this near the end as their best gig ever- surely not? But they appeared genuinely surprised at the reception from the fans.

Yes it’s a cliché to describe a band as being at the top of their game but it’s obvious that both of these bands have put the rehearsal time in and come out to nail the gigs on this tour.  The passion and love for what they do shines through, which brings me around the circle to the question of why do they bother. Right at the moment there is a plethora of good young rock bands plying their trade in the West Midlands and beyond all trying to get good management, a proper record deal rather than self-financing EP’s and CD’s, and the radio play that would help them crack the mainstream. This appears nigh on impossible for far too many bands, as the mainstream music media seem oblivious to the rock scene despite the number of teenagers here tonight. Maybe Shaun was right; Are you listening?

Fortunately many of the festivals have stages for the new and rising bands, the stars of the future. And if there’s any justice in the world then both Liberty Lies and The Fallen State deserve their time on those stages and beyond.