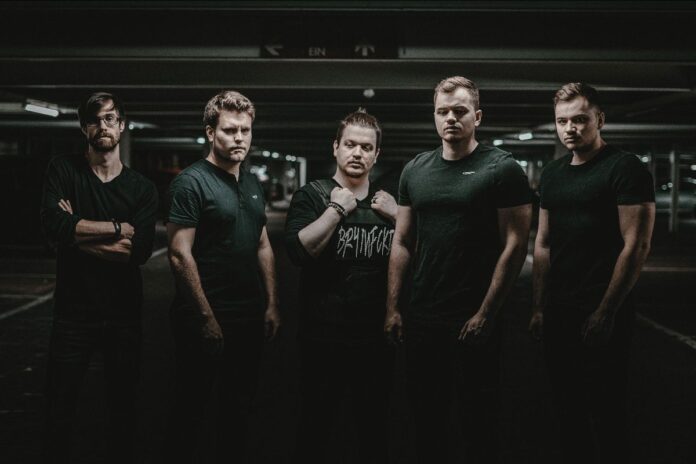 German nu-metal quintet From Fall To Spring have released a video for their new single ‘BARRIERS’, out now via Arising Empire. Exploring a past relationship, ‘BARRIERS’ mixes the modern punk influences of Machine Gun Kelly and nothing,nowhere. with From Fall To Spring‘s signature nu-metal sound.

Check out the video for ‘BARRIERS’ here: https://youtu.be/dNLrXsIxmHY

‘BARRIERS’ follows previous singles ‘BLACK HEART‘, ‘RISE‘, ‘BRAINFCK‘ & ‘DESTINY‘, which have accumulated more than 2.5 million streams on Spotify. From Fall To Spring are fuelling even more anticipation for their forthcoming album, as ‘BARRIERS’ displays yet another diverse side to the band and opens a new chapter in the alternative world of music.

Formed in Germany, identical twins Philip and Lukas Wilhelm, both in charge of vocals and guitar, keyboard player Simon Triem, bass player León Arend and drummer Benedikt Veith, are showing off a new standard within the nu-metal scene.

With a unique approach to the genre, From Fall To Spring combine bone-crushing 808s with heavy guitars and catchy harmonising melodies, crowned with high speed rap rhythms.

With this mixture, From Fall To Spring create an unprecedented sound in the modern rock scene. Working with producers Seb Monzel and head of Pitchback Studios, Aljoscha Sieg (Eskimo Callboy – ‘Hypa Hypa’), From Fall To Spring are building a production which can easily hold its own among international acts.

From Fall To Spring have remained unstoppable throughout the COVID-19 pandemic, generating a massive hype across online platforms. Starting a new sonic chapter, their single ‘RISE’ went viral on TikTok and instantly became a milestone not only in the band’s career, but in the whole German metal scene. Follow-up ‘BR4INFCK’ left no doubt that From Fall To Spring have what it takes to make it to the very top. Despite being an independent release, the song was championed by Spotify’s biggest metal playlists, garnering attention from both fans and industry alike. Now signed to Arising Empire, From Fall To Spring have found their perfect match and can’t wait to conquer the world.