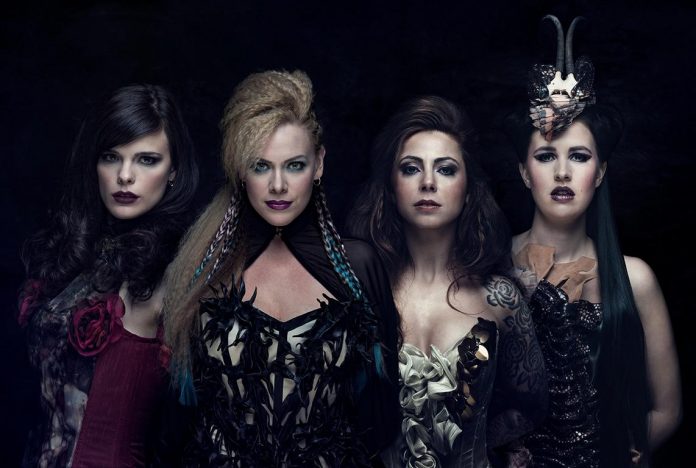 After some initial and recent promising news, EXIT EDEN have now unleashed their first video! Their debut album “Rhapsodies in Black” is now also available for pre-order.

For those who are aware of the talent of these four ladies – Amanda Somerville, Clémentine Delauney, Marina La Torraca and Anna Brunner – they can imagine what masterpiece they would create if they would ever collaborate. But the good news is: they’ve already been busy working together, their debut album is set in stone and EXIT EDEN is ready for take off.

Right on time for the release date on August 4th via Napalm Records, EXIT EDEN have now unveiled a first music video for the track “Unfaithful,” originally by Rihanna, which you can check out right HERE!

Four musicians from four different countries with four entirely different biographies, yet all stemming from the world of Rock, now united in one band: EXIT EDEN!

The all-female four piece ensemble unites all attributes ascribed to the new millennium: cosmopolitan, self-confident-independent and ready to do their very own thing! Despite their diversity, the four singers Amanda Somerville, Clémentine Delauney, Marina La Torraca and Anna Brunner blend together personally as superbly as they do vocally with their very diverse vocal tones and techniques that go from opera style to raspy rock! This constellation created extraordinary and powerful ideas and finally became their unique plan to raise EXIT EDEN‘s very own edge: to show the world that almost every classic song  can be transformed into a solid metal-rock song.

EXIT EDEN‘s debut “Rhapsodies in Black”, which will be released on August 4 via Napalm Records (worldwide, with Germany/Switzerland/Austria via Starwatch), is home to a colourful mix of international super hits from Rihanna to Madonna, from Depeche Mode to Adele, and many more. Still and all, it’s miles away from being just a cover album.

“Why a cover of “Unfaithful?” The band explains:
“Rihanna is one of the major artists in pop music these days, always on the edge of being too much, too provocative, too vulgar, yet with a hint of grace of her own. We like that, but felt that it could use a sharper edge and a darker, no-apologies vibe. The accelerated tempo gives it a new energy and spins us into oblivion with the march of banners held high!”

Previous article
Watt Is Love
Next article
Whore Get Bought