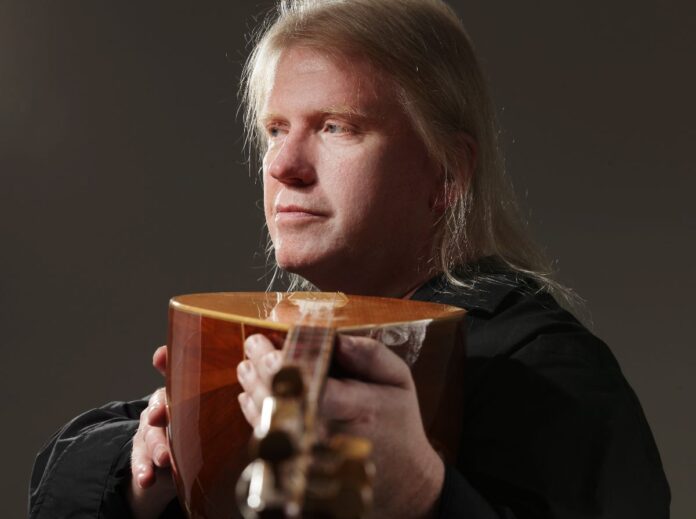 The wait is almost over – NILE mastermind and multi-instrumentalist KARL SANDERS will finally unleash the impending third chapter of his haunting Eastern-ambient Saurian solo project, Saurian Apocalypse, this Friday, July 22, 2022 via Napalm Records.

After revealing the album’s cinematic first and second singles, “The Sun Has Set on the Age of Man” and “Skull Fuck Ritual (Skull Breach Edition)”, KARL SANDERS provides a final twisted taste of Saurian Apocalypse with the release of its entrancing third single, “The Evil Inherent in us All”. The track emerges as an energetic jam with exotic instrumentation, modernized acoustic grooves and urgent tribal vocals. This standout departure from the Saurian blueprint yet again features a thematic axe contribution by guitar virtuoso Rusty Cooley, who also appeared on the album’s first single, as well as percussion by original Nile drummer Pete Hammoura.

Witness the track for the first time today alongside a transfixing animated music video.

KARL SANDERS says about “The Evil Inherent in us All”:
“I am really happy with how this song turned out. ‘The Evil Inherent in us All’ was a lot of fun to write and record. The song was inspired by an infamous night in Cairo when Egyptian Metal Artist, Impresario, and underground legend Nader Sadek took Derek Roddy, Mahmud Gecekesu and me to a performance of authentic North African Exorcism Music. The unbelievable, highly advanced and intuitive ensemble musicianship we witnessed that night was unforgettable and really opened my eyes and ears to an entire wealth of new music. In keeping with that profoundly moving communal spirit of subtle yet intense shared musical frenzy among the performers, The Evil Inherent has two close friends of mine contributing some serious musical voodoo to the track. Original Nile drummer and lifelong friend Pete Hammoura conjures all manner of wickedly grooving percussion, and our metal brother Rusty Cooley lays down some truly unique acoustic guitar exorcisms.”

Saurian Apocalypse arrives 13 years after the release of its predecessor, 2009’s Saurian Exorcisms, and nearly 20 after 2004’s equally lauded Saurian Meditation. The musical and lyrical themes on the album detail the vexing fictional journey of Dr. Eduardo Lucciani, one of very few survivors of mankind’s self-destruction, who descends into madness after discovering the violent horrors occurring at the hands of the Saurian Masters.