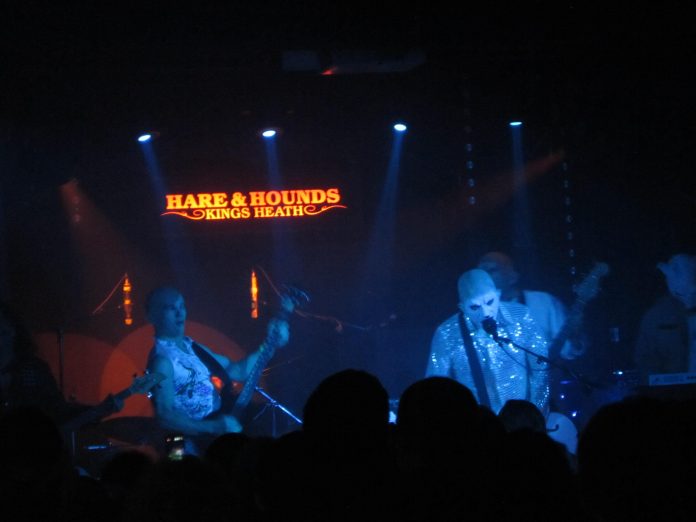 The last time Evil Blizzard came to town, it was a Friday night and half the band got caught up in the chaos of the M6 and didn`t get here in time to perform, so I was keen to see the full contingent of Blizzard`s in all their illustrious glory. The Sold-Out signs are up as I arrive in the glamorous surroundings of King’s Heath, as the band refer to where the gig is held on their Facebook page.

The wonderfully haunting `Hello` kicks off the evening as the mayhem commences. The questioning lyrics of `Who are we, We are we, Who are you, You are you” is shared disconcertingly before the tune builds and throws up a hollered “Hello…….” Wonderful. `Sacrifice` from their 2015`s “Everybody Come to Church” release follows and it`s the sort of track that Mr Lydon and his PIL contingent would kill to have written.

We get a few tracks off the latest superb release “The Worst Show On Earth” with `Unleash the Misery`, `Tell Me` and `Fast Forward Rewind` The drumming is almost tribal on `Unleash the Misery` with again almost concealed messages to set free the unhappiness before we enjoy an all-out musical assault. `Tell Me` is a headbanging, no nonsense brain bashing boogie, with its slightly menacing questioning statement of “Tell me what you want” running throughout the song. `Fast Forward Rewind` is almost a disco inspired tune that you can boogie to. The brilliant `Are You Evil? ` is offered up before the show concludes and the troupe exit the stage to rapturous applause.

This was a cracker of a show that incorporated everything from the wacky, weird, worrying but wonderful world of Evil Blizzard. Sonic grooves and unrelenting weirdness, that at times was enjoyably repetitive and delightfully hypnotic. The band deliver sinister psychedelic rock that will melt your mind and soul. You have been warned. Catch this “The Worst Show On Earth” when it comes to your town.

Previous article
FIGHT THE GOOD FIGHT
Next article
BAND OF THE DAY: DANI BELL AND THE TARANTIST