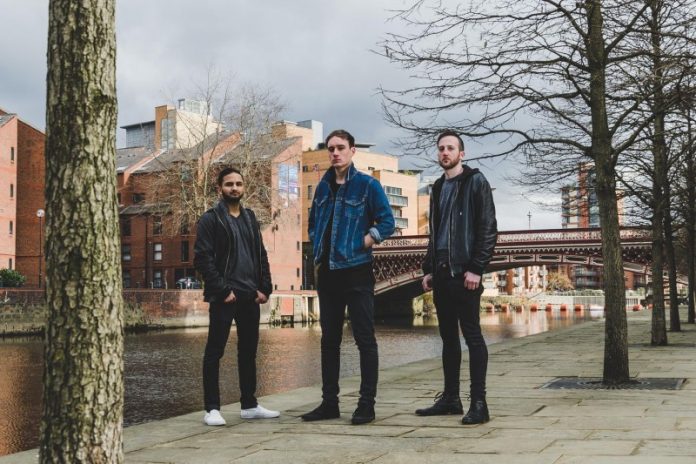 “Vexxes is the first time we’ve been a part of something where we’re completely happy with what we’re actually producing. Previously there’s always been that little bit of wish fullness in the backs of our minds, eating away at us to be doing something better,” declares vocalist, Tom Fieldhouse as his new band unveils their debut video for single ‘Everything I’ve Ever Known’. Taken from their forthcoming EP ‘Common Ground’, like the rest of the tracks, the lyrics and visuals “address those internal and external conflicts. A ‘common ground’ of issues that everyone goes through at some point; a theme that we feel people will relate to.”

Vexxes (completed by guitarist Max Oliver and drummer Shreedhan Vaidya) are not choosing the so-called ‘safe route’, the trio giving their all to avoid getting stuck in the “hell of a daily grind”: “There’s just nothing better than playing live!” Tom exclaims; “Between us, we’ve played everything from large venues and concert halls, to squats and youth hostels around mainland Europe. The feeling you get when you see people singing your songs back to you is so amazing; it’s addictive.”

Boasting a penchant for big, driving tunes, Vexxes debut E.P Common Ground, as exemplified by the single, is a collection of mini-anthems, solid guitar licks locked in tight with driving rhythms to create a platform for Tom’s soaring vocal melodies.  “We like to think we sit nicely on a line between heavy alternative music, and a more pop based alt-rock, which most bands only really achieve one or the other of,” the vocalist opines; “We are influenced by all sorts of different bands, but the ‘common ground’ for us is definitely hooky, melodic anthems with subtle heavy elements. We like to get to the hook fast, to get the song drilled into people’s heads, then we jump into epic, powerful riffy sections to keep the energy flowing.”

Vexxes Live Dates:
Vexxes will support Boy Jumps Ship @ Fibbers in York on May 1st, with more dates to be announced soon

Previous article
REVIEW: TORPEDOHEAD – III (2016)
Next article
Featured Release: “Where You Are Going To” – Robin Trower