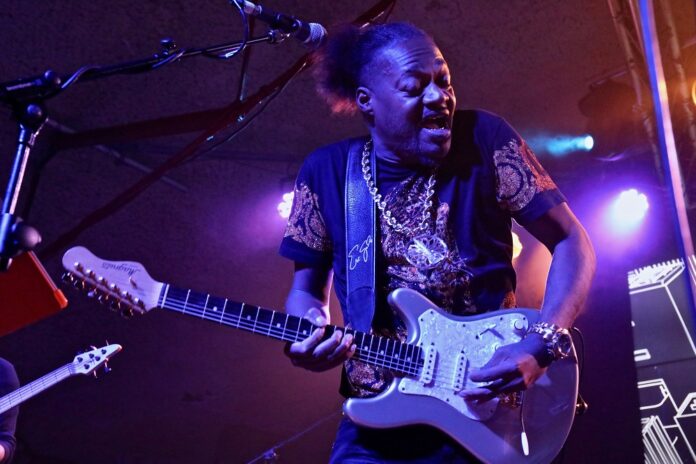 If ever there was an evening that proved the diversity of the collective we know as “the blues” then it’s this one. We’ll get to the whirlwind of Eric Gales in a minute, but the presence of Danny Bryant as the opening act underlines the strength of the bill.

Big enough to headline this room many times (and I’ve seen him do just that) Bryant is one of the finest guitarists on these shores. Just as often seen fronting his Big Band project these days, but tonight is back to the roots and it feels like there is more resonance to those words than usual, given the primal nature with which he plays these songs. He attacks “So Excited”, there’s a real grit to it as opposed to the smoother stuff of his more obvious peers. He’s a wonderful interpreter of songs too. Both “Bullfrog Blues” and “Little Wing” are given their own stamp by Bryant, who’s voice is raw as his playing. His own songs, like “Last Goodbye” and “Westport” belong in the set too, and hearing the latter makes you realise how much Bryant has to offer. Despite his lengthy career he is tender in years (“I’m only 41 and my last label stuck a record out called ‘The Early Years’” he laughs), but this is a set of an artist that has the talent, the songs and the chops to achieve what he wants to. The last song “Nine Lives” seems to exemplify that. A set to remind that Danny Bryant is still here, still making the music he loves and on his own terms.

At the start of the review, I talked about the diversity of “the blues”. In all honesty, the 90 minutes that the Eric Gales Band are on stage is a study in that, frankly.

One minute he’s playing scorching blues licks, then he’s playing funk, balladry the next, a little bit of gospel here and there. And then the thing that underscores it all. Which is not Gales’ playing, but Gales himself.

He’s got a story, and he wants to tell it, partly you suspect for therapeutic reasons, but mostly because it’s so much part of him that it’s the reason that he’s on this stage.

A small appraisal of the backstory. The hottest guitar player in the 90s, he fell into a life of drink, drugs and prison. Now clean for six years (a fact he’s rightly proud of when he tells the crowd here) his latest album “Crown” was produced by Joe Bonamassa and he believes in it so much (and it is the opinion of MV that it’s a career high) that nearly all the set he plays here comes from it.

He begins with a piece of guitar playing and “Smokestack Lightning” which make it clear that he is perhaps the best there is. When he lets it go, and really channels his fire, no one can touch him, and make no mistake, however much this music means to the packed crowd then its biggest fan is playing them. “You Don’t Know The Blues” is basically his life story, “Survivor” the redemption.

What sets Gales apart (even more than the actual stagecraft itself) is the fact that he adds just about every style of black music there is into his melting pot. He’s got a strong anti-racism message and “Thunder (The Storm)” makes it plain. “How can you love what I do but hate who I am?” he sings. It is a stark moment in the set.

The band clearly have to be good to keep up. Jonathan Lovett’s piano and keys are particularly superb adding a real jazz feel, while his wife LaDonna, takes centre stage – although not literally – and providing her stunning vocals to “Take Me As I Am”.

It’s interesting too, that the one jam isn’t a blues one, but a funky “See Of Bad Blood” which sees Smokeface, the mysterious bass player, and Nicholas Hays on drums just as much to the fore as Gales.

There’s a change of gear – or perhaps more accurately, another – for the gorgeous blues ballad “Too Close To The Fire”, and one thing that perhaps goes under the radar with Gales is his wonderful voice. He really does have it all. And as the last one, the de facto title track of “I Want My Crown” plays out the set, there’s no doubt he believes he’s out to reclaim what is his.

On any level you want to discuss it, Eric Gales is a phenomenon. He can play better than anyone, he can sing to back it up, he’s as funky as Prince and he’s got the blues in every pore. When you add in the fact he delivers his show in a manner that no one else attempts to, with the visceral and the personal wrapped up together, then to watch him, is to watch something uniquely immersive.

ALL PHOTOS FROM Martin Tierney c/o Art of Illusion.