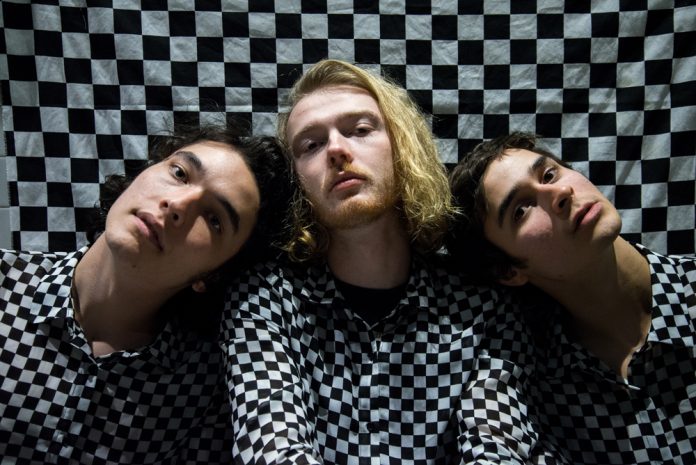 Seattle’s Naked Giants, who are currently playing shows at SXSW, have released a video for their catchy new pop tune, SLUFF directed by Sean Downey and taken from their debut album, SLUFF released on April 14th in the UK via New West Records.

The meaning behind the word “SLUFF” has become subject to debate, and the video features many Seattle artists showcasing what the word means to them within their own original art.

The song itself is an ode to their hometown, known by music fans all over the world as the epicentre of grunge, Seattle. Heavy guitars, loneliness, overcast skies, the 90’s – all the most prevalent things which define Seattle and its people.

“We tried to write a song which captured the feeling of all these things,” explains guitarist/vocalist Grant Mullen. “People have defined SLUFF as the black gunk which builds up on Dr. Martens boots in the winter, the act of shrugging something off as if you don’t really care about it, or even an acronym for our newest Seattle neighbours, South Lake Union Fuck Faces (a reference to the tech bros who have infiltrated Seattle in recent years). This is our tribute to the city which raised us. ”

Famed in Seattle for their energetic live shows, Naked Giants are made up of guitarist/vocalist Grant Mullen, bassist/vocalist Gianni Aiello, and drummer Henry LaVallee who joined up with producer Steve Fisk (Nirvana, Unwound, Soundgarden, Minus The Bear) in October 2017 to record SLUFF – a 12 song long-playing melting pot of catchy tracks influenced by all of the best genres that great bands have made us all dance to across the decades.

Formed in 2014, Naked Giants became members of Car Seat Headrest’s newly expanded 7-piece live band and will also support Car Seat Headrest with their own sets on their worldwide tour this May, stopping in the UK at the following shows below.