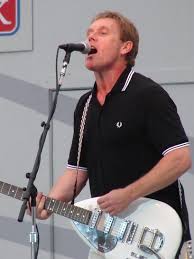 MVM doesn’t do Ska often, but our Damian does like the Beat….

I have to admit that I really like the Beat. I was fortunate enough to see the guys a few times in the early eighties and saw their last shows supporting the late David Bowie.

I hadn’t seen either Dave or Rogers’s respective outfits but have seen drummer Everett Morton’s The Beat Goes Bang a couple of times and they were pretty good.So I was quite looking forward to seeing Dave Wakeling`s The English beat on a rareish soirée to these shores. Dave having lived in California for the last few years.

A little after nine and with no fuss, the lights dim and the band walk onto the stage to rapturous applause from a nearly sold out crowd.

The place is heaving as everybody is dancing and singing along. “Twist and Crawl” and “Rude Boy Skank” follow before we get chance to take breath with a version of the Staples Singer’s “I’ll take You There”

I have to say that the band were excellent consisting of Brian “Nucci” Cantrell on drums, Kevin Lum on keyboards, Minh Quan on keyboards, Brad Engstrom on bass,

Matt Morrish doing a great job in the Saxa roll on saxophone and last but not least King Schascha on the difficult Ranking Roger part of toasting.

All the hits are covered with “Whine and Grine / Stand Down Margaret”, “Too Nice to Talk To”, “Best Friend” and the cracking Andy Williams cover “Can’t Get Used to Losing You”

Dave’s rich voice has lost none of its power and he and the guys are on top form for this terrific two hour set.

It was a touching and tender part of this delightful evening.

The band has a new studio album entitled Here We Go Love, which will be released in 2017 and is being funded through the PledgeMusic website.

I would recommend investing in this and with a bit of luck the boys will return to our shores to promote this offering upon its release.

This was a tremendous evening that ticked a lot of boxes for me and the added bonus of seeing Dave and Roger sharing a stage once again was the icing on the cake.

A pulsating night indeed from The English Beat.