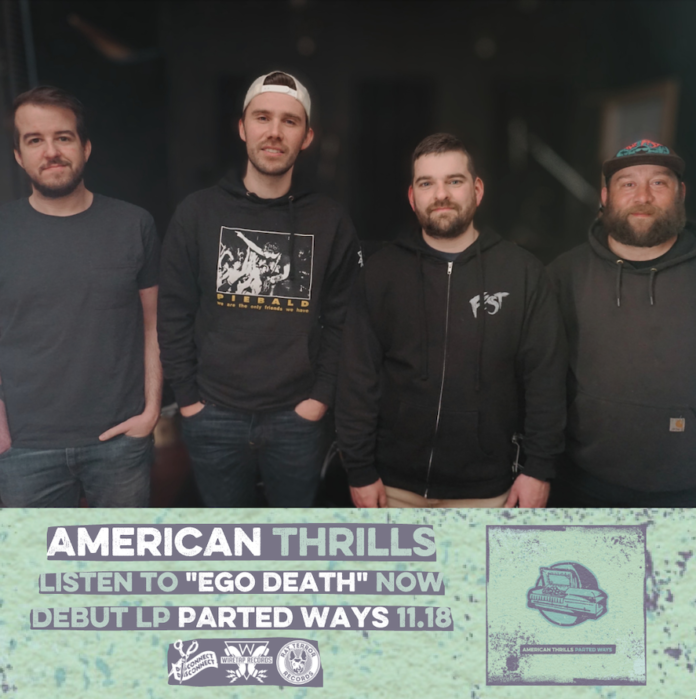 Connecticut’s American Thrills are dropping the final single off their new record today. The song is titled “Ego Death” and is streaming everywhere: https://ffm.to/y12vbwb.

In regards to the song, the band says “We reached out to Scott Stapp on multiple platforms and he refused to sing on this track. Dude is a poser. We will be spitefully playing Creed songs at Fest later this month. Be there or be square.”

You can catch the band playing some of the new tracks from the record later this week down in Gainesville, Florida at Fest 20. American Thrills will be playing Saturday, October 29th at Boca Fiesta @ 8:50PM.

American Thrills are dropping their debut LP “Parted Ways” on November 18th via Wiretap Records(US) / Disconnect Disconnect (UK). A limited vinyl run of the record will be available in December. Andy Jackson from Hot Rod Circuit will be joining them for their album release on November 26th at Stonebridge in Milford, CT. Tickets: https://www.eventbrite.com/e/andy-jacksonhot-rod-circuit-american-thrills-the-split-coils-shortwave-tickets-430931125597