First up tonight are Southern Rock / Americana inspired four piece The Fargo Railway Co from Sheffield. They kick off with `Long Night Alone` a track from their live album “Sharing The Load” before playing a thoroughly enjoyable forty-five minutes which had well written and at times a fair share of amusing songs by a band who are clearly seasoned musicians.

The guys have a new album “Under These Lights” and understandably quite a few of tonight`s set was culled from this with `One Mile `, `Pretty Little White Ones`, `Bought And Sold`, `Magazine Lied`, `Punch Drunk` and `Something In The Water` a song written as a homage to singer Jody`s hero Bill Mallonee from the Vigilantes of Love. There were a few other songs of note with `Drinking Game`, `Line & Go` and `Shotgun Wedding`

The band Jody Davies (guitars and vocals), Andy P Davison (guitar), Andy Dye (bass) and Steven (Smack) McMurray  (drums) have been around since 2013 and are worth checking out if they visit your town. They certainly had this intimate audience eating out of their hand. 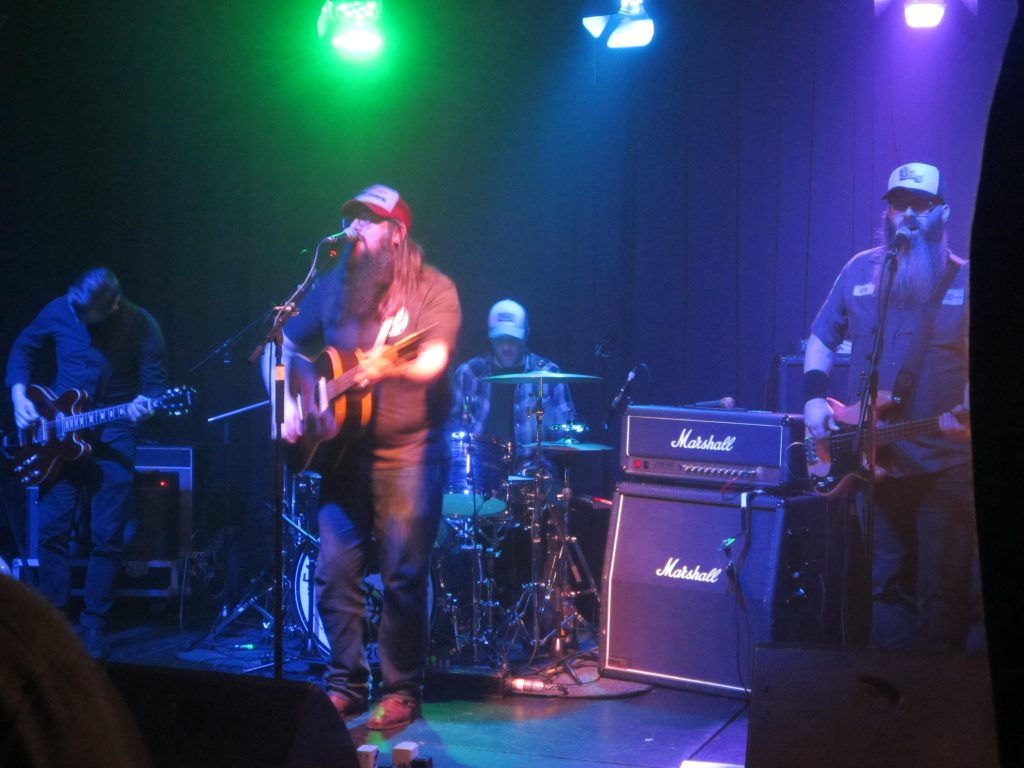 Drivin N Cryin are on stage tuning up long before anybody realised. I wasn`t sure of what to expect as it`s been twenty plus years since I last saw them. But there was a fair bit of variety with Americana, Rock and Blues, The band have a new album to promote “Live The Love Beautiful” and a few of the songs shared came from this release. The slightly narrated `Free Ain`t Free`, upbeat `Over And Over`, countryfied `Step By Step` and quiet but deep title track `Live The Love Beautiful` all get an airing. `Ian McLagan` is also shared with singer Kevn Kinney donning a harmonica and offering the song on an acoustic guitar.

An older song that I really like `Build A Fire` plays out before we get a story about trying to unsuccessfully interview Muddy Waters for an underground magazine in 1978.

The remaining part of the show is more Blues oriented with songs such as `Straight To Hell`, a track written in honour of Black Sabbath `Mad Man Blues` and a cover of The Rolling Stones `Jumpin` Jack Flash` which the guys recently recorded at the legendary Muscle Shoals studio. The final two numbers are where the band Tim Nielsen (bass), Dave V. Johnson (drums) and Laur Joamets (guitar) really let rip with `A Good Country Mile` and `Honeysuckle Blue`

Well there was something for everybody tonight with this nigh on two-hour set. It`s been a long while since the band played Birmingham and the enthusiastic audience showed their appreciation. It`s been a long time since I last saw this band and I have to admit they haven`t lost any of their edge.